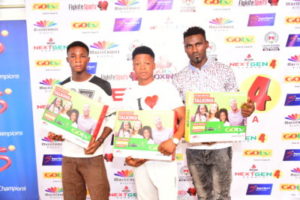 Adeyemi Opeyemi Elijah, the best boxer at the recently concluded GOtv Boxing NextGen 4 in Abeokuta, Ogun State has commended the sponsors for providing young boxers the opportunity to achieve their dreams and earn a living.

Elijah, 18, was announced the best boxer by the panel of judges at the closing ceremony last Saturday.

The youngster also said he harbours the dream of becoming Nigeria’s preeminent boxer and attributed his progress to GOtv Boxing NextGen Search. He recalled that he found out about GOtv Boxing Next Gen Search in 2017 and participated in the third edition, which held in Ibadan.

Though selected by the judges, Elijah was advised to delay his decision to turn professional on account of age. He, however, returned for GOtv NextGen Search 4 and, as he had previously done, made the cut and was adjudged the most promising among the 20 selected from a thick crowd of 150 boxers.

“I found out about GOtv NextGen Search in 2017 and took part in the edition held that year. I was among those selected at GOtv Boxing NextGen Search 3, but I was asked to come back this year,” he said.

Elijah explained that he made up his mind to put in more effort to ensure that he would be selected and was happy when he was named the best boxer. The young boxer is hopeful that his success at GOtv Boxing NextGen Search 4 will have a positive impact on his life and career, adding that the involvement of GOtv in boxing has given hope to young boxers like himself to make something of their lives.

“My progress since last year is because of GOtv’s involvement in boxing. They are encouraging Nigerian boxers and have given people like me the opportunity to earn a living,” he said.

Akintayo Aminu, who was named first runner-up to him, also thanked the sponsors and expressed confidence that their involvement in boxing bodes well for young boxers.

“I know that GOtv is a good organization and I believe they have good plans for us. I think it’s very good that GOtv is doing this to improve boxing in Nigeria,” said Aminu.

The second runner-up was Shogbanmu Waheed, who along with the two others, were presented with GOtv decoders.

GOtv Boxing NextGen Search 4 produced 20 new boxers, all of whom will have their professional licences and pre-licensing medical examinations paid for by the sponsors in addition to being in line to fight at coming editions of GOtv Boxing Night.