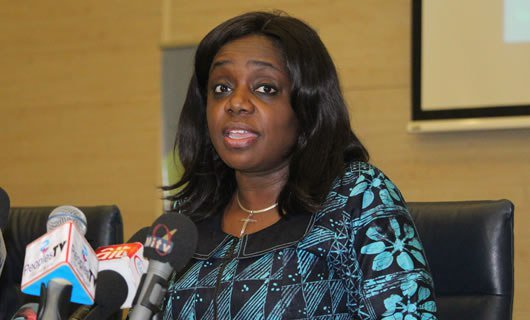 Last Friday, September 14, 2018, marked another sad turn in the history of Nigerian politics. A second minister of finance resigned on that day. Her resignation was most likely in fulfillment of a private directive from her boss. But the circumstance of her eventual exit from office tells a tale of official corruption and political immorality that can cripple our democracy, if allowed to continue. Kemi Adeosun became the latest casualty of a system that thrives on immoral stamina, and the agents of immorality have ensured that public discourse is centered on a forged certificate.

There are many talking points, especially on the issue of the forged certificate of exemption from the National Youth Service Corps (NYSC). On that issue, one can safely say that the minister was a victim of the atmosphere of corruption that we wallow in within our borders. One can imagine a promising professional with lofty dreams and ambition, eager to play her part in the emancipation of Nigeria from the political doldrums we have been resigned to for years, who realised that the small issue of a certificate from NYSC could stand in the way of that.

Now, it is difficult to imagine that a person that had been groomed in the British system of education and who spent her early career in the United Kingdom would have decided to obtain a forged certificate of her own volition. Given her position and status at the time that document was procured, it is reasonable to assume that she had farmed out the procurement to an associate or aide who would have been directly responsible for whatever act of illegality was committed in the procurement. This, however, does not remove the former minister from possible liability or complicity, especially if the aide intimated her on the plans to obtain the document illegally. Even if she was unaware, the entire episode, once it went public, remains as a stain on her person and office and she would never have been able to maintain a safe distance from it.

For those who called for her resignation after the matter became public, there is no criticism or condemnation for their calls or outcry. Even if a certificate of discharge or exemption from the NYSC is not an express condition for being nominated as a minister in the Nigerian government, the presence of a forged item as a supporting document in a person’s pack of credentials, is not a negligible issue. However, in the circumstances of this case, the issue of when the certificate was discovered, and the immediate course of action by whatever person or authority that discovered it is more important in the long run.

The online publication, PREMIUM TIMES, broke the story, after what appears to have been considerable investigation of the lead over a substantial period of time. The same publication brought to light, that members of the National Assembly, especially those in the leadership, had been aware of Mrs. Adeosun’s defective certificate for a long time before it became public. Not only that, the leadership of the National Assembly had likely blackmailed the former minister into towing its line on many issues, especially in the disbursement of huge sums to the parliament, on the threat of exposing the defect in her document.

If these allegations are true, it implicates the National Assembly and exposes the immorality that pervades the leadership of that institution. It also implicates the former minister herself, at least after the fact of the forgery. Whether or not she consented or was privy to the fact of the forged certificate that found its way into her credentials, she may have become an accessory after the fact when she did not reveal it when she became privy to it and when she possibly played the game of blackmail with the leadership of the National Assembly. Following this line of thinking, the former minister was complicit and deserved to be relieved of her office, but then, the greater crime may have been committed by the leadership of the National Assembly and every member of that institution that may have been aware of the blackmail.

The first Nigerian minister of finance to resign was Ngozi Okonjo-Iweala, who served in that capacity on two occasions. She was forced to resign in the Obasanjo administration when her team’s advise and policies were continually jettisoned by Obasanjo era politics. In her books, Reforming the Unreformable and Fighting Corruption Is Dangerous, she chronicled her experiences in her first and second outings as minister in the Obasanjo and Jonathan administrations respectively. Mrs Okonjo-Iweala revealed how the National Assembly continually made calls injurious to the nation’s finances and held the treasury ransom when its demands were not met. Her books are an expose on how the National Assembly is the bane of finance ministers in Nigeria and how little progress can be made without somewhat accommodating the excessive and self-centered appetites of members of that arm of government.

Now that we know of the possible blackmail that Adeosun may have been subjected to, it is not surprising to discover that some members of the legislature remarked that Adeosun had been the most co-operative minister of finance till date. To remain in that job under the weight of the blackmail was a disservice to the country and whatever political or party considerations that could have led to that cooperation will be insufficient to absolve the minister of the guilt. Even though her time at the helm of affairs at the ministry of finance had been largely positive, even with the recession we experienced, this matter has put an unshakeable blight on her character. It would seem that when she was faced with the options of personal disgrace or rolling in the mud with pigs, she chose the unethical option of her immoral tormentors.

The real casualty in this episode is integrity. Once again, the agents of immorality that are scattered across the public and private sectors in Nigeria, have sent a possible reformer out of office. When Okonjo-Iweala’s mother was kidnapped in 2012, it was a step out of the closet for these agents of doom who ordinarily prefer to act in secrecy and with less than obvious tactics, like blackmail. Since then, we have known them to be in the shadows, plotting and forcing their will on the nation and its treasury. Corruption does not fight back as people say, it has rather been engaged in an unceasing siege on our collective identity and future as a nation. Sometimes we fight back, but more often than not, we play along to the tune of the immoral. This is likely the untold story of Adeosungate.

The lesson intending office holders and all Nigerians should learn from Adeosungate is that there is no skirting around corruption for the “greater good”. The end will never justify the means, especially not in this country. There are opposing agents of immorality who ironically serve as a moral check on the other when damaging information is discovered. The groups that heightened Adeosun’s certificate brouhaha today are covering up much worse acts themselves. The key is to develop independent institutions that are beholden to no one, and can be trusted to investigate and publicise their findings without fear or favour. In this case, the press played this role to the extent of its being used as an instrument of vendetta against the minister or her principal.

There is no saying that the National Assembly should have made public its finding on the certificate if, indeed, it discovered this in 2015 and rather decided on using the fact as an instrument of blackmail. For Adeosun, she ought to have come clean and removed herself from the situation if she had not been part of the whole enterprise from the beginning. This is probably why people with good intentions steer clear of government roles; it is the place where integrity goes to die.