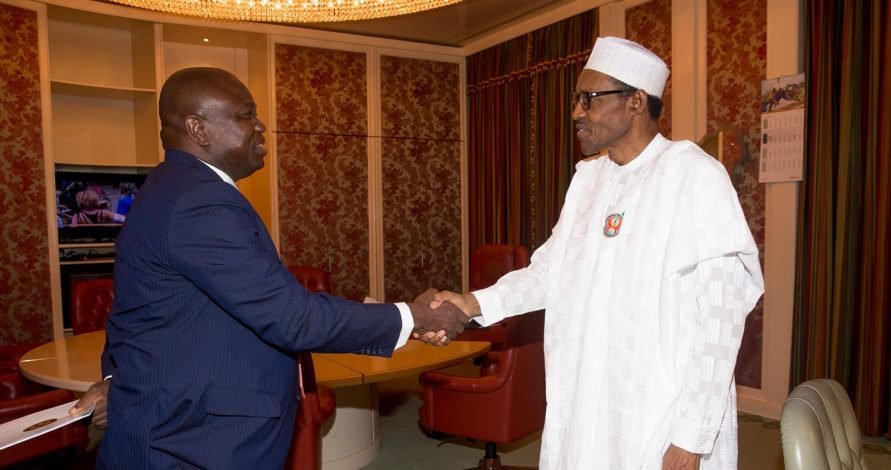 President Muhammadu Buhari on Thursday in Abuja met behind closed door with Gov. Akinwunmi Ambode of Lagos State at the Presidential Villa, Abuja.

The governor would be updating the president on latest political development within the All Progressives Congress (APC) in Lagos State.

The governor’s political godfather, Asiwaju Bola Tinubu and the leadership of the APC in Lagos State were alleged to have mounted pressure on Ambode, to drop his second term bid.

Tinubu, who is alleged to have endorsed Ambode’s opponent within the APC, Mr Babajide Sanwo-Olu, had refused to back Ambode’s second term ambition despite pleas by concerned individuals and several socio-political groups from within and outside Lagos state.

It was gathered that governors under the platform of APC, who met on Wednesday night in Abuja, had on behalf of Ambode, sought the intervention of President Buhari in the APC crisis in Lagos state.

The Chairman of the APC Governors’ Forum, Gov. Rochas Okorocha, delivered the governors’ message to the president few minutes before his meeting with Ambode.

A source in the presidency said that the president might end the tussle between Ambode and the Mandate Group, led by the APC National leader, Asiwaju Bola Tinubu.

The president may also meet with other APC stakeholders in Lagos state within the week as part of efforts toward resolving the rift.