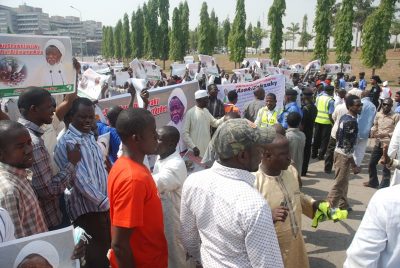 The Nigeria Security and Civil Defence Corps (NSCDC) FCT Command, has assured people in the Federal Capital Territory of their safety, as members of the embattled Shiite group resume their protest in Abuja.

The Shiite protesters, among other demands, have called for the release of their leader, Ibrahim El-Zakzaky, who has been in police custody since 2015.

David Akinbinu, the FCT Command Public Relations Officer (PRO) told NAN in an interview on Thursday that personnel of the Defence Corps were effectively monitoring the movement of the protesters, especially in and around the Central Business District.

The protesters were seen rallying around the Sheraton Hotel, in the FCT, creating anxiety and panic among some people in the territory.

Akinbinu, however, urged residents and visitors not to panic as the NSCDC and other security agencies were on standby to ensure adequate security.

“Our officers are on the ground and have been deployed to the nooks and crannies of the FCT.

“They are on patrol and are also going round the territory to ensure everyone is safe to go about his or her normal legitimate activities.

“The FCT is safe, as you can see people moving about without any untoward restrictions, ” he said.