Another Day of Mourning and Pain 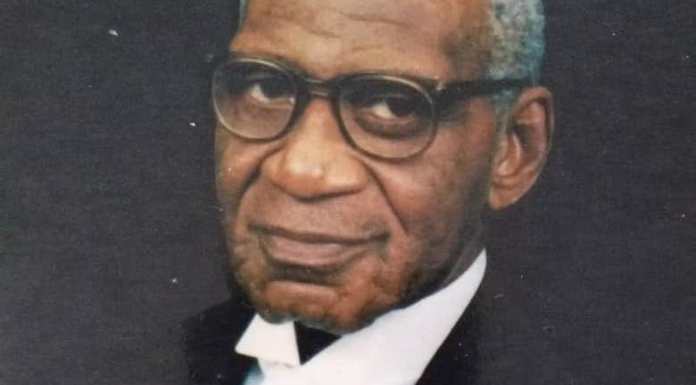 At the risk of being accused of ingratitude to the Almighty in addition to incurring the wrath of the departed Prince Adedapo Adeniran at the ripe old age of 94, our deep sense of loss is nevertheless overwhelming.

For those who may insist on dragging us to court for what is a purely civil matter, (certainly not criminal) our defence is as robust as it is unassailable. Indeed, our brief is very brief.

Prince Adeniran was indispensable. That attribute led us into a false sense of security – that he would always be here. Besides, he was supernatural. Neither the vicissitudes of life nor his memorable battles in the courtroom over six decades left any dent on him. He kept the scars firmly under wrap except for the occasional salvos in newspapers (especially “The Sun” and “ThisDay”) and of course the volcanic eruptions in his books: “The Futility of The Land Use Decree 1978” and “Nigeria: The Case for Peaceful and Friendly Dissolution”

Either of these books could have landed him in detention by the successive military regimes that dominated our nation’s political landscape and monopolised what they curiously described as “The balance of forces”. There was no balance. All the force was in the gun and the finger on its barrel.

If he survived all these brutal military regimes, why would he succumb to death under a benevolent civilian government? There are sufficient grounds for suspicion!! Indeed, the Inspector-General of Police, Ibrahim Kpotun Idris without any prompting has waded into the issue by raising the red flag of foul play. Besides, he has instructed his very able and amiable deputy, DIG (Chief) Taiwo Lakanu who is in charge of Operations to get to the bottom of the matter.

Not unexpectedly we have been requested to avail the police of our list of suspects. The old boys of King’s College, Lagos have submitted only one name – St. Gregory’s College Old Boys Association!! It is not entirely by co-incidence that both Chief Tunji Gomez, another old boy of King’s College died at the age of 90 just a few days before the demise of Prince Adeniran. Again, the finger of suspicion is pointing in only one direction – St. Gregory’s College Old Boys Association.

It has not gone unnoticed that both Chief Gomez and Prince Adeniran who had very long and distinguished careers at the bar stretching over sixty years were denied the rank of Senior Advocate of Nigeria [SAN] regardless of their unblemished professionalism.

What makes it all the more galling and inexplicable is that it was Prince Adeniran who in 1966 at the National Bar Association Conference held in Port Harcourt proposed the motion that the practice of Law which had hitherto been dominated by expatriates should be the exclusive preserve of Nigerians. Alas, the beneficiaries of the Prince’s uncommon vision prefer to subscribe to amnesia.

In addition to being erudite and cerebral, Prince Adeniran thoroughly relished the long-standing rivalry between King’s College (his Alma Mater) and St. Gregory’s College. Hence, when he learnt  of my candidacy (as the in-coming president) of St. Gregory’s College Old Boys Association), he readily endorsed it!! I remain eternally grateful to him and Chief Ladi Williams SAN who have provided my election campaign with vital legal backbone. The eligibility clause has been crushed under the “Doctrine of Necessity” to enable an old boy of King’s College to contest and win election as President of St Gregory’s College!! That is real progress.

The Chairman of Independent National Electoral Commission [INEC], Professor Mahmood Yakubu has graciously agreed to conduct what he is determined to demonstrate to the rest of the world as a classic “free and fair election” the like of which has never been witnessed in Nigeria. Vintage stuff.

Prince Adedapo Adeniran had a formidable library of books, photographs and newspaper articles which watered and nourished his fountain of knowledge in addition to providing the anchor sheet for his wisdom. He certainly had a soft spot for my grandfather, Dr. J.K. Randle whose exploits in medicine, education, politics and philanthropy were carefully recorded and relished by him. As for my father, Chief J.K. Randle who preceded Prince Adeniran at King’s College, virtually every year at the Annual Thanksgiving (in memory of my dad), the Prince would speak of him fondly and endearingly in superlative terms.

Time and space have conspired to deny us the opportunity to dwell on the special bond between the Prince and my two cousins – John and Afolabi Lardner. Regardless, it would be remiss of us not to acknowledge the uncommon loyalty, exceptional friendship and steadfast devotion of the Prince to the two brothers especially Mr. Harry Afolabi Lardner SAN who was at King’s College with him. A special chapter would have to be devoted to the role played by Prince Adeniran during a critical period in the sojourn of all three principal characters in London as students and the special bond between Prince Adeniran and H.A. Lardner.

Actually, uncle Harry Afolabi Lardner started off as a science student at “KC” before proceeding to St John’s College, University of Cambridge but eventually ended up at the Bar where he certainly distinguished himself.

For most of his life, Prince Adeniran found contentment and fulfilment living right amongst the people at 134, Bamgbose Street, Lagos in utter disdain of exclusivity in Ikoyi; Lekki; Victoria Island; Banana Island; Snake Island; Peacock Island; Monkey Island; Grasshopper Island; Crocodile Island; Ogogoro Island etc, or anywhere else, apart from his annual summer vacation in London. From his vantage position he had a ringside seat which enabled him to assess the rot in our nation and the subversion of the dream of our ancestors in addition to mortgaging the destiny of future generations whom we have saddled with humongous debts – both local and foreign.

If the politicians were genuinely committed to serving us, the home of Prince Adeniran should have been their regular rendezvous to avail themselves of a veritable barometer of progress or regression; and calibrate their strategy accordingly. He did not care whether his neighbours were Christians, Moslems or animists. He was well steeped
in the traditions and culture of Lagos and his home was strategically located in the “Brazilian Quarters” as the “Eyo”; “Igunnu”; and other masquerades waded past his window/front door. It was with similar enthusiasm and vigour that the “Fanti” broke their stride to pay him well deserved homage.

As the oldest surviving old boy of King’s College, Lagos, he was an inspiration and role model to all of us who shared the same antecedents, credentials, and pedigree with him in the pursuit of justice and merit.

He led a serious and purposeful life to which I am confident his widow Dr. (Mrs.) Florence Abiola Adeniran as well as the children Oyinade and Biodun would attest in their witness statement. He was also witty and articulate – in Yoruba, English and in Latin (plus a dose of Greek philosophy). His passion was not confined to King’s College or the law. He was profoundly disturbed by the evidence of the prosecution witness – that our nation is on the verge of chaos and Lagos is in the blighted cusp of history, while the suffering masses cannot make sense of our government’s fragile hold on truth.

Quietly, Prince Adeniran was an encyclopaedia – his breadth of knowledge and wisdom was phenomenal. In his own unique way, he created waves and rode the storm gallantly. Even a brief encounter with him could not but ignite one’s imagination. If only there were more people of character and integrity like the departed, our nation would not be reeling from one crisis to another. Like the ancient mariner, he had his compass in hand before he set sail with philosophy as his mast: “My philosophy of life is simple – work hard, be honest, don’t be envious, and try to keep a clean slate in whatever you do.

Take things as they come and always make the most of whatever opportunity you have in a positive way. No man has fulfilled his life aspirations because we are aspiring as long as we are still living.” Nevertheless, his final wish is boldly stated: “CREMATE ME WHEN I DIE.”

His life has come to a dead end. Though a glorious one. Considering the deluge of armed robbery, kidnapping, assassinations, looting of the treasury, ritual murders, corruption and suicides all over the country, perhaps he had concluded that this is a magnificent time to draw the curtain on the stage and make his exit.

It is our country (not his ashes) that is in ruins with attestation provided on our nation’s tombstone as a final verdict by the Goalkeepers Report published on the same day Prince Adedapo Adeniran was buried (18th September, 2018):

In a country where the average life expectancy hovers around 47 years, Prince Adeniran swam against the tide and against all odds. He lived twice as long – as yet another confirmation that he was supernatural!

The reason we are gathered here in the hallowed Assembly Hall of King’s College, Lagos I suspect (and I ask for your forgiveness) is that each and everyone of us considered him special. Before his exit, he ensured that his insurance policy guaranteed him protection from witnessing Nigeria’s further decay and decadence. He did not lose the battle. As a “Kingsman”, he was profoundly aware that where jungle justice prevails, there are neither umpires nor referees.

Around his abode, there was no security fence nor wall. His door was always open and so was his heart. We are now compelled to make amends and atone for our deficiency.

He was a living witness to the historical trajectory of our nation’s economic development from independence on 1st October 1960 when we were level (if not ahead of) with Singapore, Malaysia, South Korea and Hong Kong and now when we are trailing well behind in education, health, literacy, and security. The Global Quality of Life Index is a profoundly disturbing indictment of Nigeria and its leaders (especially Old Boys of King’s College and St. Gregory’s College). Clearly, our nation has been afflicted with a nervous breakdown.

We should have persuaded our beloved Prince Adeniran to tarry a little while longer to witness the Nigeria of his dream. This is a case of missed opportunity and squandered possibilities. It seems to remind us of an old Chinese proverb: “When the student is ready the teacher will come.”

In our own case, the Prince and teacher was here long before the students were ready. May his soul rest in peace.