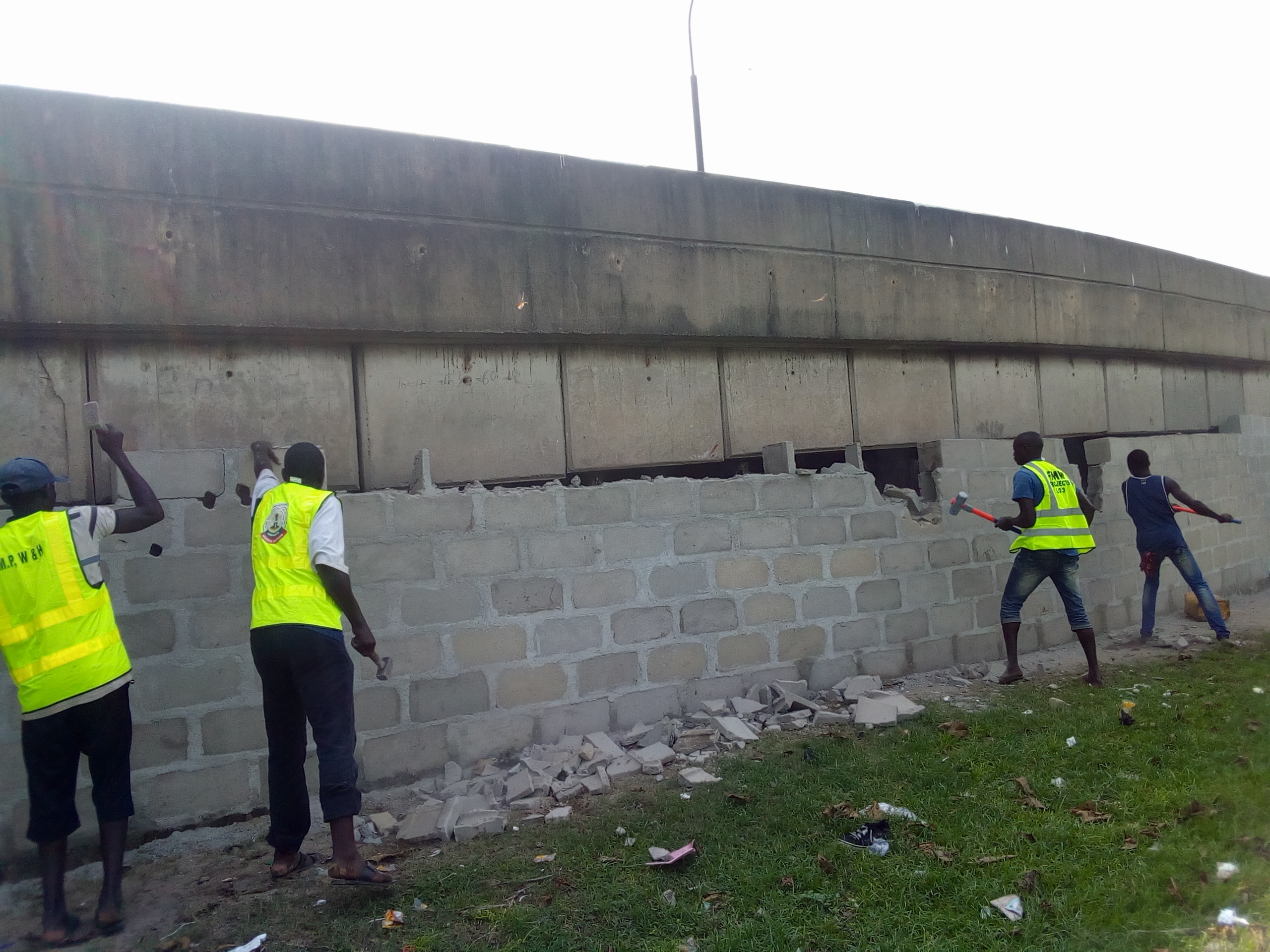 The Federal Ministry of Works in Lagos State has begun demolition of illegal structures under bridges used as hideouts by miscreants and other illegal activities, the News Agency of Nigeria (NAN) reports.

The Federal Controller of Works, Mr Adedamola Kuti, led ministry officials alongside the Police Task Force
from the Alausa Command on a tour of various sections under the bridges late on Thursday.

The taskforce headed by DSP Shettima Kolo served eviction notices on illegal occupants on the Right of Way, traders, artisans and other business concerns under the bridges.

The operation began with the demolition of a fence constructed under the ramp on the bridge linking Adeniji Adele Road which also links the Carter Bridge and Ebute Ero.

During the demolition exercise, several arrests were made while police also recovered some weapons including axes, cutlasses and knives from the illegal occupants under the bridge.

A staff of an advertising agency, who identified himself as Mr Seyi Philips told ministry officials that his firm erected the fence to protect facilities servicing its billboard from social miscreants.

Philips added that they did not envisage that the construction would become a hideout for the miscreants.

During inspection of the Iddo Bridge which is an extension of the Carter Bridge, NAN observed that several lock up shops had been constructed under the bridge.

Some of the shops were being used as warehouses and the occupants claimed that they had been paying rent to the
administrators of the facility for several decades.

The demolition squad advised owners of lock up shops and warehouses under the Iddo Bridge which is an extension of the Carter Bridge to vacate before commencement of the demolition.

Other bridges inspected are the Marine Beach, Otto, Apapa and the Costain Bridges.

Kuti told newsmen that three bridges had been destroyed by fire in the past as a result of the activities of
the illegal occupants.

“We need to safeguard our infrastructure and that is why we are appealing to you (the press) and to Nigerians
that once you notice anything that could affect these infrastructure they should please inform us.

“Some people are living under these bridges, cooking, doing all sorts of things and some of the items recovered by the police were weapons of destruction.

“So, what are they doing there? Apart from the fact that their activities constitute a big abuse to the bridges, it also constitutes big security threat because you may never know what they are doing under those bridges especially at night.

“This is a very serious abuse that would not be tolerated,’’ he said.

Kuti lamented that some of the illegal occupants have constructed permanent structures under the bridges
which were usually locked up during the day.

Kuti announced that the illegal occupants would be given one week written notices with effect Sept. 24 to vacate the Right of Way before eviction and demolition of their structures.