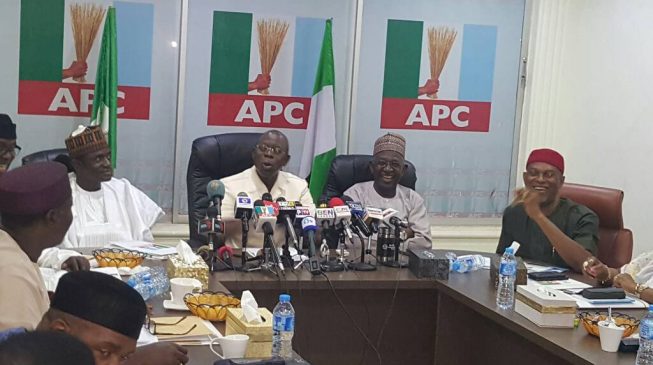 No fewer than 15 APC State Governors seeking re-election in 2019 were drilled by the APC Screening committee ahead of its party primaries.

The governors, who were screened at the campaign office of the APC national chairman included governors of Imo, Zamfara, Oyo, Borno and Nasarawa states.

The above governors were screened for senate position, while second term governors seeking re-election were also screened

Speaking to newsmen separately after appearing before the screening committee, all the governors noted that the screening was more or less a formality.

They expressed confidence that they had no reason to entertain fear over their re-election.
Bauchi State Governor, Muhammed Abubakar, told newsmen that the defection of the Speaker of House of Representatives, Yakubu Dogara, would not affect the fortune of the party in the state or his re-election bid.

He added that the Speaker represented a constituency that had a total of 70,000 registered voters, saying that he won election with a margin of 393,000 in 2015.

The governor, however, said that Bauchi state had adopted the indirect primaries to choose the party’s candidates for all elective offices in 2019 general elections.

“The position of the State Executive in Bauchi which they took while I was away in China with President Muhamnadu Buhari was for indirect primary.

“The Constitution of the party provides for indirect. The last NEC meeting allows for the State Executive Committee to take charge and determine for themselves what type of primary they want to adopt and Bauchi chose indirect,” he said.

Speaking on the recent gale of defection after going through the screening, Gov. Umar Ganduje of Kano said the state chapter of the party gained more members than those that left.

He described those that left the party as nomadic politicians.
He added that the exit of former Kano State Governor and Senator representing Kano central, Rabiu Kwankwaso from the party had been naturalised with the entry of another former governor of the state, Ibrahim Shakarau to the party.

He added that his experience with the screening committee was the easiest because he had no challenger.
“The screening went on successfully. My own took less than three minutes then I bowed and left because I have no challenger in APC governorship primary in Kano state,” he said.

The governor of Oyo, Abiola Ajimobi, however, said that he had no anointed aspirant as all the contestants were qualified and capable of governing the state.

“The screening is a normal process and it is just to access your eligibility as well as ability to win, and I think that has been done.

He said that Oyo state had also adopted the indirect primary to choose the party’s candidates for all elective offices for 2019 general elections.

“We have so many people who are eminently qualified aspirants and for me, I have given them free hands, let them talk to all party members. And whoever they want among them, I am okay,” he said.
In his own reaction, Niger State Governor, Sani Bello, said that the party’s stakeholders had met and decided to settle for the direct primary in the state.

Bello, who was also seeking re-election, told newsmen after his screening that all APC stakeholders in his state were on the same page as regard the mode of primary election.

Asked on the strategies he is putting in place to ensure APC’ victory at the general elections in Niger, the governor said: “With the adoption of the direct primary the party is becoming more popular.

“We will try as much as possible to uphold fairness and justice in the party, and give everyone equal opportunity to vie for any position they want.
“We will ensure that by God’s grace we have outstanding victory in 2019,” he said.

Gov. Abdulaziz Yari of Zamfara while supporting the use of indirect method of primary in states, said his colleagues, who had opted for the mode, were mostly on ground and would easily adapt to any of the options for primary election.