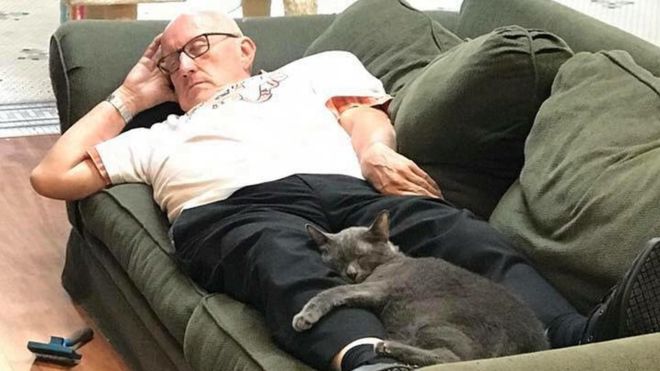 Terry Laurmen, 75, has never thought he would become an online sensation by napping with shelter cats.

The photo of him sleeping with cats in various positions at a pet shelter in Wisconsin has gone viral on the internet and helped the shelter raise over 30,000 dollars.

Terry became a regular volunteer at the Safe Haven Pet Sanctuary about six months ago.

“He just came along one day to the shelter and introduced himself, he said he would like to brush cats, eventually it became everyday.

“They all know him, when he walks through the door they run over to him because they know he has the special brush and special treats.

“They all pile on top of him and rub all over him and just love him,’’ sanctuary owner Elizabeth told the BBC.

But grooming 20 to 30 cats can get exhausting, and the staff began snapping shots of Terry taking his daily siestas with his furry friends and shared some of them on the shelter’s facebook page.

Unexpectedly, the post became a hit, and has been shared across the world for over 23,000 times.

Thousands of well-wishers have shared comments and pledged thousands of dollars to the shelter in donations.

The retired Spanish teacher, with no mobile phone or computer, still can not get his head around his newfound online fame.

However he said he would do anything to raise money for the shelter.