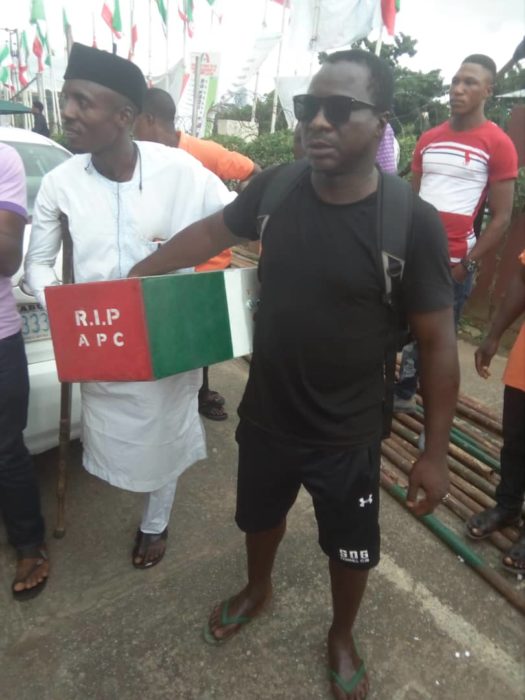 A lone trekker, Isa Mohammed Munlaila, who began trekking from Lagos to Abuja last month against President Muhammadu Buhari’s 2019 presidential ambition, has arrived Abuja after spending 34 days on the road.

Munlaila left Lagos on 23 August and arrived Abuja on Tuesday. He said he was fulfilled to have trekked the distance from Lagos to Abuja against the second term aspiration of Buhari.

Speaking with PM News, Munlaila said he normally trekked from 6.00am to 6.00pm on daily basis and then slept somewhere before continuing his journey to Abuja.

He had initially planned to reach Abuja between 18 and 20 days, but because of a sore leg, the journey lasted for 34 days.

“As I trekked, I saw people angry with this present government because of hardship and failure to deliver on what was promised. When people see me, they hailed me for trekking. Some people were asking me if I was doing it for some political parties and I said no, but for the youths of this country. We are for good governance,” he said.

Munlaila, who said he is not a politician, however, said based on people’s view during his trek from Lagos to Abuja, he would endorse the aspiration of former Vice President, Atiku Abubakar to become president next year.

According to him, from his interaction with people, they preferred the candidacy of Atiku among all Peoples Democratic Party, PDP, presidential aspirants because of his achievement.

He said when he got to Abuja, he went to the PDP National Secretariat and asked to see the National Chairman of the party, but was told he was away.

“Because of what I have heard during my trek, I will endorse Atiku for 2019 presidency. If Atiku has the chance to govern, Nigeria will be a better place,” he said.