2019: INEC to ease participation of People with Disabilities 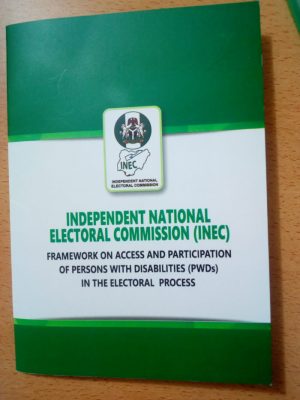 The Independent National Electoral Commission (INEC) has unveiled a plan to enhance the participation of all marginalised groups in the electoral process.

The INEC Chairman, Prof. Mahmood Yakubu, who unveiled the framework on Tuesday in Abuja, said it would open the door for more meaningful participation of the PWD community in all aspects of the electoral process.

Yakubu, represented by a National Commissioner, Dr Adekunle Ogunmola, said the document also revolved around the rights of eligible PWDs to vote, be voted for, and hold political party offices, among others.

He said that INEC has the responsibility of ensuring PWD friendly and compliant environment and processes during elections.

“It should also be viewed as the symbolic beginning of a concerted, deliberate and coordinated initiative at mainstreaming the community.”

He added that excluding the PWDs from the political process, amounts to denying the nation their much-needed contributions in the task of nation-building.

He stressed that such a situation would dent Nigeria’s domestic and international commitment to respecting and promoting the human rights of all its citizens.

“Democracy is all about participation, it should be an all-comers affair.

“For it to have any meaning, all eligible citizens must be allowed to participate meaningfully not just symbolically.”

Yakubu added that although the document may not carry the force of law in all regards, but it places a moral burden on all stakeholders to ensure the inclusion of eligible PWDs in the electoral process.

“As a Commission, we intend to lead in this regard. We take the Framework as our Charter with all citizens living with any disability.

“We hold ourselves bound by the commitments contained in this Framework.”

Yakubu disclosed that INEC had put in place various platforms for the engagement of PWDs as well as the expertise to implement the Framework.

“Persons with disabilities were extensively consulted at the State and National levels, the outcome from all these engagements enriched the content of the Framework. ” 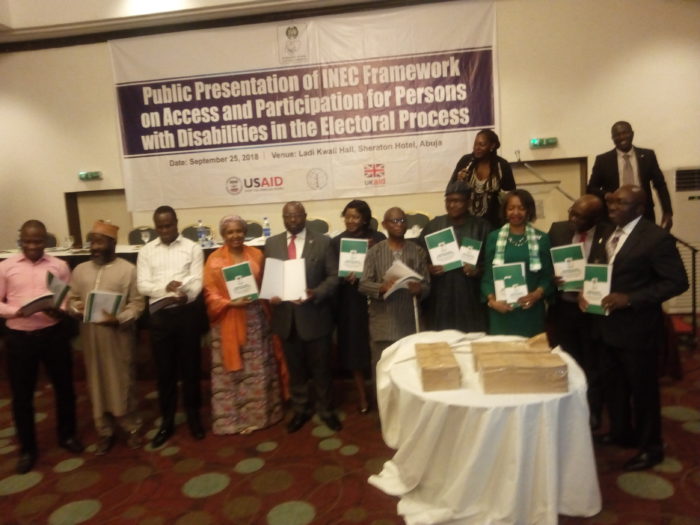 Ogunmola stressed that the document would greatly reduce all forms of barriers experienced by PWDs in all aspects of the electoral process.

“I must also state that it is in fulfilment of the commission’s commitment to expanding the electoral space in order to enhance the participation of marginalised groups in the electoral process.”

He disclosed that INEC had introduced innovations, such as written instruction at polling units for those with hearing impairment, as well as sign language interpreters at its major events.

“INEC has also provided aids and materials such as magnifying glasses at polling units during elections, transcription of voter education materials to Braille and many more to ensure the full and effective participation of PWDs in the electoral process.”

Ogunmola reiterated INEC’s total commitment to ensuring that all marginalised groups participate in the electoral process.

“This is hinged on the belief that all stakeholders are critical to the entire process, and the credibility and legitimacy of any electoral process is inextricably linked to the integrity, inclusiveness and acceptability of the process.”

The Minister of Women Affairs and Social Development, Sen. Aisha Alhassan, said the ministry would partner with INEC to ensure improved access and active participation of PWDs in the electoral process.

Alhassan, represented by Valentine Ezeilo, said that Nigeria has over 10 million PWDs many of them within the voting age.

“Over the years, many of them have been disenfranchised in one way or the other and denied the opportunities to actively participate in politics.

“Hence, I want to say that this event could not have come at a better period than now that the country is preparing for the upcoming 2019 elections.”

The framework was launched along with the braille version for the virtually impaired persons.