Nothing to justify plans to deny Ambode second term - Osinbajo 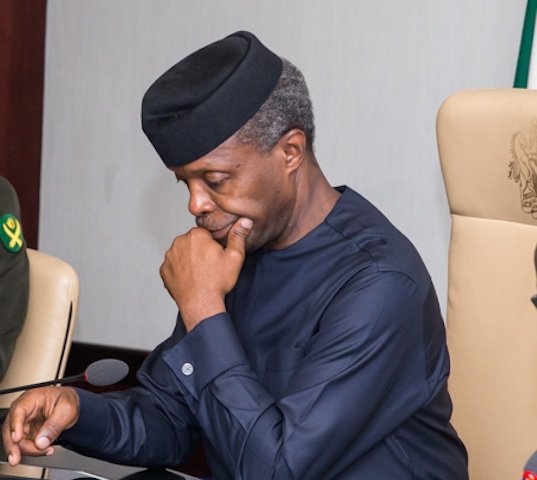 Vice President, Professor Yemi Osinbajo on Saturday warned leaders of the All Progressives Congress (APC) in Lagos State against the dire consequences of denying the State Governor, Mr. Akinwunmi Ambode a second term, saying there was absolutely nothing to justify such move.

Osinbajo handed down the warning at a meeting of the Governors Advisory Council (GAC), the highest advisory body in the Lagos APC which was held in Lagos today.

Sources at the meeting revealed that the VP unequivocally told the party leaders to be mindful of their actions, and not place personal interest above that of the masses who wants the Governor to continue in office beyond 2019.

According to an impeccable source, Osinbajo categorically said he was asked by President Muhammadu Buhari to proceed to Lagos to again appeal to APC National Leader, Asiwaju Bola Ahmed Tinubu and some leaders of the party opposed to Ambode’s second term bid to rescind the decision in the interest of the party.

The source said: “Yes, the Vice President attended the GAC Meeting that took place today and told the gathering that he had been sent in by the President for the second time to come and appeal to Asiwaju (Tinubu) particularly realizing that they should stick to their best chances in Lagos for the 2019 elections.

“The VP queried them further that will it be enough to tell the whole world that it is for our own selfish interest that we are saying that we are not going to endorse Ambode? Is it because Ambode has not performed? Ambode has performed and everybody knows that he has performed,” the source quoted Osinbajo to have told the gathering.

Corroborating the development, another source said it was true that the Vice President was totally against the decision of some party bigwigs to move against Ambode’s second term bid.

“The VP told them that in the eyes of the populace, he (Ambode) has done well and so what is it that we are now going to tell the whole world the reason for saying we are not going to support Ambode? So, does it now mean that our own personal interest should be considered larger than the interest of the masses and the State,” he said.

Tinubu, at the meeting was said to have responded that all politics was local and later threatened that he was taking another aspirant, Babajide Sanwo-Olu to the party’s secretariat on Acme Road, Ogba to raise his hand as the candidate of the party.

However, Tinubu could not do so after realizing that the party members were ready to call his bluff, while he ran back and sent Senator Anthony Adefuye to make the announcement endorsing Sanwo-Olu on behalf of the GAC.