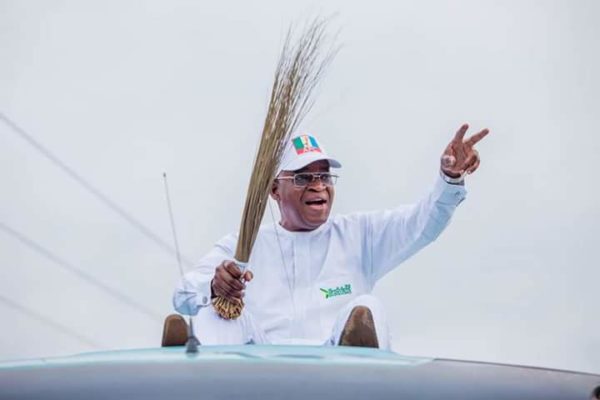 The All Progressives Congress (APC) in Osun says the victory of its candidate, Alhaji Gboyega Oyetola, in the recent governorship is incontestable.

Mr Gboyega Famodun, the State Party Chairman, made the remarks a news conference on Tuesday in Osogbo.

Famodun said that APC had reasonable and justifiable proof that the Independent National Electoral Commission (INEC) did its best to conduct free, fair and peaceful election.

He, however, said that it was worrisome that the Peoples Democratic Party (PDP) was deceiving itself that it won the election.

“Alhough the PDP did so many illegal and reprehensible things, we still emerged victorious.

“To doubt the credibility of that election will be like working against the grains of facts, truth and evidence to the contrary,” Famodun said.

Besides, Famodun said the party was not impressed with some foreign and local election observers, who described the election as not credible.

“We are not impressed by the volte face of some foreign and local election observers who in one breath acknowledged the peaceful and fair nature of the process.

“But in another questioned the outcome just at the tail end at the collation centre, where the die was already cast, and nothing can be changed or influenced again,” he said.

According to him, some observer groups that were not physically present during the election went ahead to depend on PDP falsehood to adjudge the election as a flawed.

Meanwhile, the Forum of Senior Special Assistant to Gov. Rauf Aregbesola said the governorship election in the state was credible and fair.

Mr Bashir Lawal, who spoke on behalf of the forum at a news conference in Osogbo, said APC did not rig the election as alleged by PDP.

Lawal said that the election was peaceful and credible, adding that APC victory was the reflection of the people’s will.