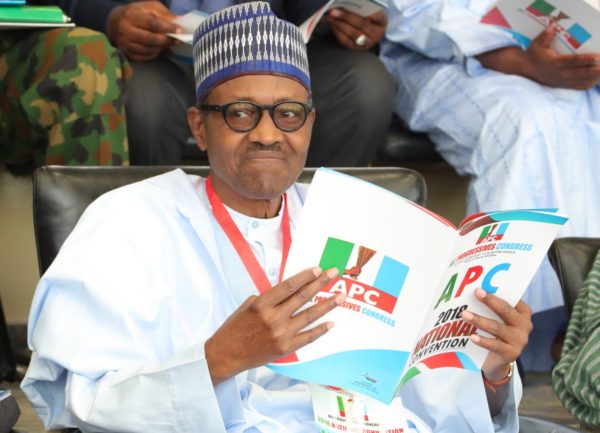 President Muhammadu Buhari: No fewer than 7,000 delegates from the All Progressives Congress (APC) ratified his re-election for a second term.

No fewer than 7,000 delegates will ratify on Saturday, President Muhammadu Buhari’s nomination as the candidate of the All Progressives Congress (APC) in next February’s election.

Gov. Kashim Shettima of Borno and Deputy Chairman of the APC Presidential Convention Planning Committee said the delegates will converge at the Eagle Square, Abuja for the ratification.

Shettima made this known while briefing newsmen on the party’s preparations ahead of the convention.

The delegates are drawn from the 36 states of the federation and the Federal Capital Territory (FCT), Shettima said.

He disclosed that the convention committee on security was working closely with security agencies to ensure a hitch-free exercise.

Shettima, who said that the convention would commence at 2.00 p.m, added that its transport committee was making arrangements to reduce to the barest minimum, inconveniences it might cause Abuja residents.

“We moved the convention time from 9.00 a.m to 2.00 p.m deliberately to accommodate delegates that are coming from far and near.

“Incidentally, people from Kogi for instance, can leave and be in Abuja within three hours, but believe me, all our delegates will be on ground by 2.00 p.m,” he said.

Shettima stressed that the presidential convention was to ratify the nomination of President Buhari as the APC presidential candidate for the 2019 election.

“Let me assure you that the nomination and ratification of the candidacy of President Buhari is a commitment to service, progress and quality change.

“The convention is a special one for the emergence of our presidential flag bearer; no other issue will be tabled.

“In subsequent conventions, and the National Working Committee (NWC) and National Executive Committee (NEC) meetings, other issues can be discussed and sorted out,” he said.

The committee deputy chairman, while speaking on the challenges that followed the party’s primaries in some states of the federation, said the NWC was working round the clock to ensure that the issues were amicably resolved..

“Despite some of the problems we have encountered during the primaries in our various states, the NWC is working assiduously to resolve all the issues.

“It is a family quarrel, and we are going to sort things out amicably,” he said.

Shettima added that votes cast for President Buhari during the party’s recent presidential primaries held across the federation and the FCT would be revealed at the convention.

The APC Expression of Interest and Nomination forms were purchased for President Buhari by the Nigeria Consolidation Ambassadors’ Network on Sept. 5, at the cost of 45 million.

Buhari had in April declared his intention to seek re-election at the APC National Executive Committee (NEC) meeting.

The President, who is the APC sole presidential aspirant, while submitting the forms, on Sept. 12, said; “I am taking this step with all humility, sense of responsibility and unquestionable desire to serve and protect the interest of all Nigerians.

“Let me today, appeal to party members not to be complacent but to prepare, strategize and win 2019 elections.”