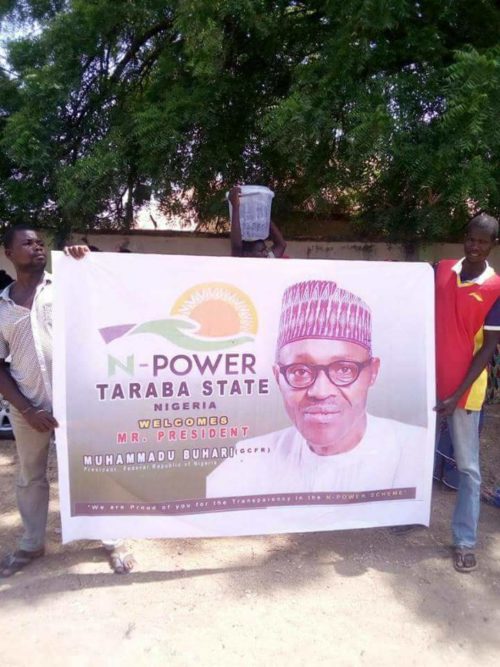 N-Power graduates welcome President Buhari to Jalingo in March this year. 500,000 graduates will be enrolled on the programme from 1 August

The beneficiaries, who spoke with the News Agency of Nigeria (NAN) in Abuja on Tuesday, said they had made good contribution to the standard of education in FCT.

The batch ‘A’ N-power-teach beneficiaries who were engaged in November 2016 are due for official disengagement as the two-year programme will be rounded off in December.

Mrs Omoyeni Samuel, an N-teach beneficiary, who teaches at the Government Secondary School, Lugbe, called on the Federal Government to consider the plight of the students suffering the dearth of teachers.

“It is becoming increasingly difficult to take care of the students because the number of teachers to students is not commensurate with their needs until the N-power teachers come on board,” she said.

She said that before they came on board, the students were lagging behind, adding that their involvement in teaching the students had improved their learning skill.

Samuel said that it would amount to double jeopardy if they were asked to leave without considering the impact they had made on the students.

Mr John Nwankwo, another teacher in a public secondary school in Abuja, appealed to the Federal Government to ensure that the beneficiaries were retained.

Nwankwo said that most of the N-power teachers had contributed enormously in the development of the students.

He said that disengaging them without considering the consequences would not augur well for the country’s education.

He said that a good number of the beneficiaries were dedicated to the programme and were effectively complementing the teachers.

He therefore urged the Federal Government to take the priority of retaining them by given them automatic employment.

“Federal Government should be magnanimous enough to give these n-power teachers automatic employment, if they are desirous to improve the standard of our education,’’ he said.

Mr Aminu Balarabe, also a beneficiary at the Government Secondary School, Bwari, pleaded with the government to offer them automatic employment after the expiration of their term.

“We need to continue our contribution to increasing the standard of education, we have done a lot in this little time, the students are now better off,’’ he said.

He urged the Federal Government to direct the authorities in charge of the scheme to ensure immediate recruitment of beneficiaries, stressing that it would help the students in no small measure.

The N-power is one of the initiatives of President Muhammadu Buhari administration to help young Nigerians acquire and develop lifelong skills.