Bolt ready to play for his footballing future 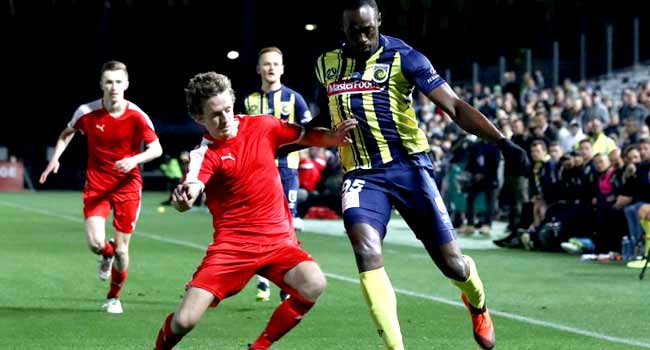 Olympic sprint champion Usain Bolt is set to start up front for the Central Coast Mariners in a trial match on Friday and the Jamaican said his future as a soccer player could be on the line.

The 32 year old eight-time Olympic gold medalist is trying to transform himself from global athletics superstar to professional football player.

He hopes to win a contract for the Mariners ahead of the 2018-2019 Australian top flight campaign.

His previous appearance for the first team was against an amateur select side on Aug. 31, where he came on as a substitute in the 72nd minute and appeared to lack match sharpness, the touch and skill required for a professional.

“This will determine … (what) the club want to do with my career, so it’s a very important game.

“I have been improving but you won’t know what level you’re at until you play a competitive game, so I just have to go out there and see what I need to do or whether I should continue or not.

“I’m just pushing myself and have put in the work so now I have to go out there and execute,” Bolt said on Wednesday.

Bolt said that coach Mike Mulvey had told him he was likely to start the game on Friday against Macarthur South West United at Campbelltown Sports Stadium.

He would be deployed in a more forward role than on his initial appearance.

“He said he wants to play me up top.” He just told me to make sure that I’m focused to push myself and just take my chances when I get them,” Bolt said.

Bolt added that he had been playing a series of practice games with other players hoping to make the first team squad and he felt that his fitness and skills had improved.

“My movement and my touch is much better now. How to set my body, where to place the ball.

“There is a lot of things I have learned. I am much fitter now so I will have more time on the field and that’s good,” he said.

Bolt, who put his efforts to carve out a football career on hold for a week to fulfill an overseas commitment last month, said he would thrive on the pressure.

“I’m the type of guy who likes competition, I like pressure so I’m excited to go out there and give it my best,” he added.