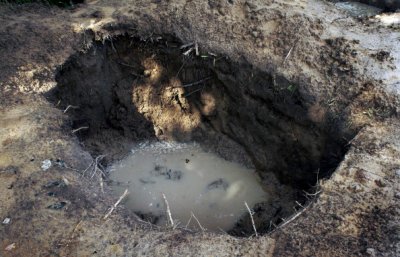 A mass grave containing 75 bodies was found West of the Libyan coastal city of Sirte on Tuesday, a military source said on Wednesday.

A source with the Sirte security forces said that the forces were notified by a resident about the mass grave, which had been found in an agricultural area 15 km west of Sirte, 450 km East of the capital Tripoli.

“The force recovered the remains of 75 unidentified persons and the exhumation of the bodies was carried out in presence of a court representative,’’ the source said on condition of anonymity.

DNA samples had been taken for analysis.
If confirmed, this will be largest mass grave found in Sirte since the city was taken over by government forces in 2015.

Sirte had witnessed months of fighting between forces allied with the UN-backed government and the Islamic State (IS) terrorists, which ended in December 2015 with the government forces taking over the city.

In June 2016, a mass grave and secret prison were found in Libya’s Sirte amid an ongoing operation fighting Islamic State (IS) militants, sources told The New Arab.

Seven bodies were found buried in the grave that was discovered in a farm west of the city, while three prisoners were saved when security forces came across a secret prison in another town after liberating it from the militants.

The prisoners – said to be held captive for several months – were found in dire humanitarian conditions, the anonymous source told The New Arab.

Meanwhile, the battle to cleanse Sirte of IS militants has continued to progress with government forces closing in on the group’s stronghold.