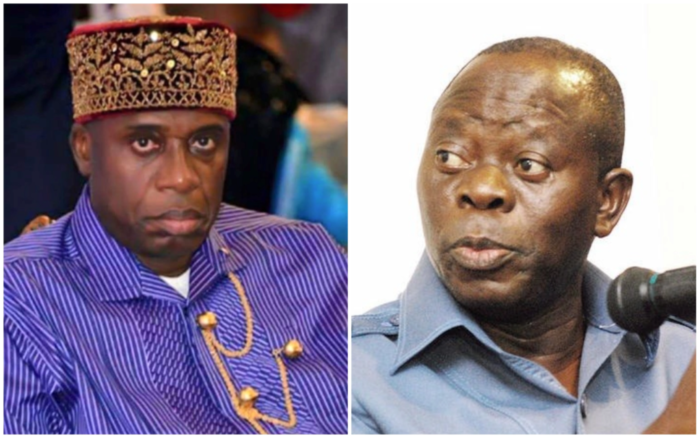 Amaechi and Oshiomhole over to you. Ehat happens next.

Rivers State chapter of the All Progressives Congress (APC) has been thrown into confusion as a high court in Port Harcourt on Wednesday nullified the nomination of Mr Tonye Cole as the governorship candidate of the party in the state on grounds that his nomination is a function of illegality and unconstitutional acts.

The court also nullified the APC senatorial, House of Representatives and House of Assembly primaries conducted on the premise of the illegal ward congresses.

In a judgment delivered by Justice Chiwendu Nwogu on Wednesday, in a suit filed by Ibrahim Imah and 22 others against the APC, the court declared that the ward congresses of the party were illegal because they were not conducted in line with the APC guidelines and constitution

He stated that all actions taken by the APC during the pedancy of the suit have been set aside because they are illegal and unconstitutional.

He said: “The Rule by might must be checked by the rule of law. We must restore the hope of the common man in the justice system”.

Justice Nwogu who based his judgement on the Amaechi versus INEC Matter of 2007, noted that having studied the submissions in the matter, he was bound to make consequential orders to ensure that justice was done in the case.

He stated that the High Court has jurisdiction to entertain the matter as an appeal filed by the respondents at the Court of Appeal, Port Harcourt to stop proceedings on the suit was rejected by the Appellate Court on September 21, 2018.

He stated that all through the hearing, the APC filed no counter-affidavit denying the facts of the matter as presented by the applicants in the originating summons.

Justice Nwogu said that it is trite law that facts not disputed are deemed admitted.

On the suit filed in an Abuja High Court by a faction of the APC, Justice Nwogu declared that the court is of coordinate jurisdiction with the High Court in Port Harcourt and cannot sit in appeal over it.

He added that the suit filed by Ibrahim Imah preceded that of the Abuja High Court by a faction of the Rivers State APC.

Before the delivery of the judgment, a counsel to the APC, Prince OSM Azunda moved a motion to arrest the judgment.

However, Justice Nwogu dismissed his application which he termed as a ploy to arrest the judgement.

Following the judgment, the APC no longer has a candidate for the governorship, Senate, House of Representatives, House of Assembly elections in the forthcoming 2019 general elections.