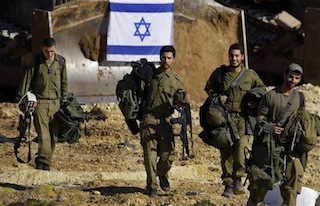 Rocket alert Sirens that sounded on Thursday in Israeli Communities near the border with the Gaza Strip were a false alarm, the Israeli Military said.

Earlier, Israeli Army Radio had reported that the Israeli military was engaged in increased activity near the border with the Palestinian enclave.

An Israeli military spokesman declined to comment on the report.

There have been no rocket attacks on Israel by Palestinian militants in the Hamas Islamist-run Gaza Strip since Israel and Hamas agreed on a truce on Aug. 9, which ended the latest fighting in a series of brief cross-border flare-ups.

Qatar has been driving to improve humanitarian conditions in Gaza in a bid to prevent any escalation in violence.

Doha has announced it would provide 150 million dollars in emergency aid to the poverty-stricken strip and paid for fuel delivered through Israel.

Egyptian efforts to mediate a long-term ceasefire between Hamas and Israel has so far shown little progress and Palestinians have continued to hold protests at the Gaza-Israel border which often turn violent.

Israeli troops have killed at least 195 Palestinians and wounded thousands since the protests began in March, Gaza medics say, and one Israeli soldier has been killed by a Gaza sniper.

Citing security reasons, Israel and Egypt maintain tight restrictions on their borders with Gaza, a policy that has deepened economic hardship in the territory of two million Palestinians.

The Gaza protesters are demanding that Israel lift its blockade and the right to return to lands that Palestinian families fled or were driven from on Israel’s founding in 1948.