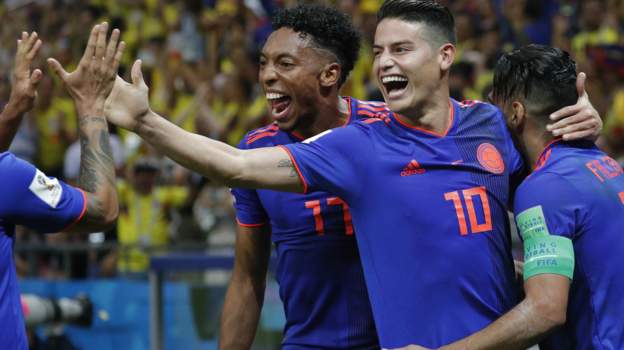 Colombia crushed a shorthanded and overmatched U.S. 4-2 in a friendly in Tampa on Thursday in the latest reminder the Americans are far from threatening the world’s best.

James Rodriguez scored Colombia’s first goal in the 36th minute and set up their last as the South Americans stormed back after trailing 2-1 early in the second half.

A win or draw for the U.S. would have been a boost for a team which failed to qualify for the 2018 FIFA World Cup in Russia.

That was after losing to Trinidad and Tobago a year and a day ago on Thursday.

But it was not to be.

Colombia thoroughly outplayed the U.S. in the first half on a hot and humid night in Florida.

They drew first blood in the 36th minute when Rodriguez curled a left-footed shot into the top left corner.

With Christian Pulisic, Weston McKennie and Tyler Adams all unavailable due to injuries, interim U.S. head coach Dave Sarachan made no changes at halftime.

But his team came out more energised after the break.

Kellyn Acosta latched onto a long pass in the box from Antonee Robinson to level the game in the 50th minute.

The U.S. took a 2-1 lead three minutes later when Timothy Weah found space on the left wing and delivered to Bobby Wood, who split two defenders to score.

Colombia’s Carlos Bacca squared the contest three minutes later, however, with a shot past the diving arms of goalkeeper Zack Steffen.

The South Americans nosed ahead in the 74rd minute, with Radamel Falcao capitalising on a defensive breakdown to score, sending the team’s yellow-clad fans into a frenzy.

They put the game away in emphatic style in the 79th minute when Rodriguez found Miguel Borja across the box and the forward hammered a volley into the corner.

Next up for the U.S. is a friendly against Peru on Tuesday in Connecticut.

Colombia on their part will engage Costa Rica on the same day in New Jersey.