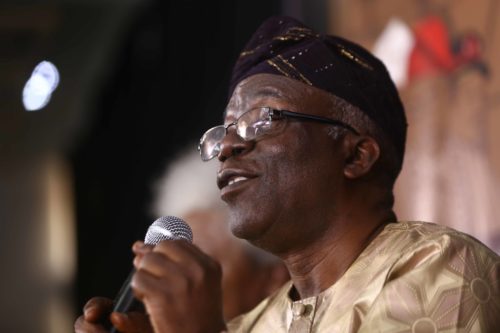 Human rights lawyer, Mr. Femi Falana (SAN), and a civil society group, Access to Justice, on Sunday faulted the travel ban placed on about 50 prominent Nigerians by the Federal Government which claimed to be fully implementing the Executive Order 6 recently issued by President Muhammadu Buhari.

According to Falana in a statement, the President should immediately withdraw the travel ban, but Access to Justice called for the total cancellation of the entire PEO6, which it argued “is unquestionably anti-democratic and a veiled snare for citizens’ rights”.

“The PEO is also a gratuitous piece of dangerous precedent that opens the door to an uncontrollable dictatorship; it can be used arbitrarily and vindictively to fight and muzzle political opposition, and promote wholly politically partisan objectives,” the Director of Access to Justice, Mr. Joseph Otteh, added in a statement on Sunday.

Punch reports that Presidential spokesperson, Mr. Garba Shehu, had said in a statement that the travel ban followed last week’s judgment of the Federal High Court validating the Presidential Executive Order 6 which provides for interim seizure of assets connected with criminal investigations or ongoing trial to prevent the said assets from being dissipated.

But in separate statements on Sunday, Falana and Access to Justice, said the executive order could not be the basis for preventing suspects from travelling.

Falana, who described the travel ban as “superfluous”, because either the court or the various anti-corruption agencies had already seized the passports of the affected persons.

He added that it is an ingenious design to expose the Buhari administration to ridicule”.

He said, “If the Federal Government had done some background check it would have discovered that the names of the 50 VIPs have long been placed on security watch list while their passports have been impounded by the anti-graft agencies or the courts as one of the conditions for admitting them to bail.

“It is public knowledge that whenever the defendants wish to travel abroad for medical treatment they usually apply for the interim release of their passports. Since the courts have taken judicial notice of the perilous state of medical facilities in the country such applications are usually granted.”

He said, “Notwithstanding such judicial indictment of politically exposed persons seeking medical treatment during trial the law has not authorised the Executive to restrict the movement of criminal suspects.

“In February 2009, the Federal Government regime directed all Nigerian embassies and high commissions not to renew the passports of Messrs Nuhu Ribadu and Nasir El Rufai (now Kaduna state governor) on account of intra class feud. Both of them were then living in exile.

“But as soon as the attention of former President Umoru Yaradua was drawn to the case of the Director-General, State Security Service v Olisa Agbakoba (supra) he ensured that the illegal directive was immediately withdrawn.”

On its part, the Access to Justice, in rejecting the travel ban, called for the reversal of the PEO6 which it said could be vindictively used to fight and muzzle political opposition, and promote wholly politically partisan objectives.

Otteh said in the statement that the judgment on which the Federal Government anchored the decision for the issuance of the travel ban, made it clear that the Attorney-General of the Federation who is the coordinator of the implementation of the PEO6 could not deny owners access to their assets without a court order.

Its Director said in a statement, “It is also legally warrantless; the government claims the judgment of Hon. Justice Ijeoma Ojukwu on the case involving PEO 6, gives it authority to bar the named persons.