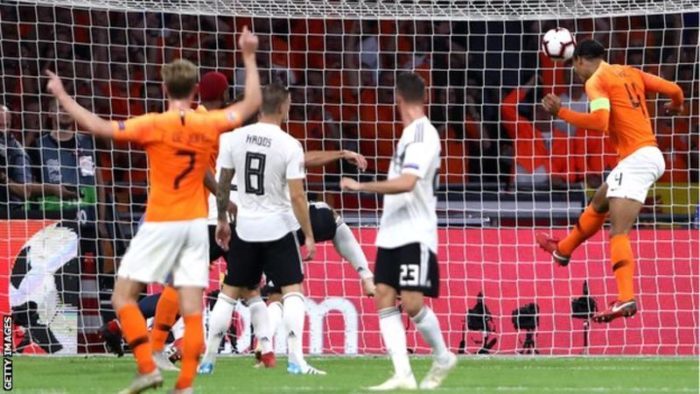 BBC reports that it was the sixth defeat in 10 games for Low’s side, who went out at the group stage of the World Cup in Russia.

“After conceding, you could see that recent results have led to a lack of confidence,” he said.

“Why are we not scoring? That’s difficult to answer, we have clear chances.”

Low’s Germany, who won the World Cup in 2014, have only one point from their opening two Nations League matches.

They face world champions and group leaders France in the competition in Paris on Tuesday.

Saturday’s loss in Amsterdam was the first time Germany have lost by three goals to the Dutch.

Van Dijk reacted first to nod in from close range after Ryan Babel had headed against the crossbar following Depay’s right-wing corner.

Depay added a second in the 86th minute from a quick counter-attack after being set up by Quincy Promes, before Wijnaldum sealed the win in injury time with a low shot into the bottom corner.

“Breaking apart like that in the last 10 minutes is not good,” Low added.

‘Germany need success very quickly’ – Mertesacker on Low’s troubles, Arsenal & English youngsters
Striker Timo Werner said: “We missed out on scoring when we had the chances to do so.

“Then there is this corner which hits the bar and is then turned in. That was a punch in our stomach.”

Since the end of their World Cup qualifying campaign in October 2017, Germany have won only three of their past 12 matches – a 2-1 success in the finals against Sweden and two victories in friendlies against Saudi Arabia and Peru.

After van Dijk’s opener, the Dutch had chances to double their lead but Wijnaldum shot wide and Depay headed off target.

Manchester City forward Leroy Sane, on as a second-half substitute, should have equalised but he dragged a shot just wide when unmarked eight yards out.

That miss proved costly, as with Germany pushing for an equaliser, they gave the ball away and Promes played in Depay for the second goal.

The former Manchester United winger then hit the crossbar, before Wijnaldum struck again.

The Netherlands, managed by former Everton boss Ronald Koeman, are second in the three-nation group after beginning their campaign with a 2-1 defeat by France in September.