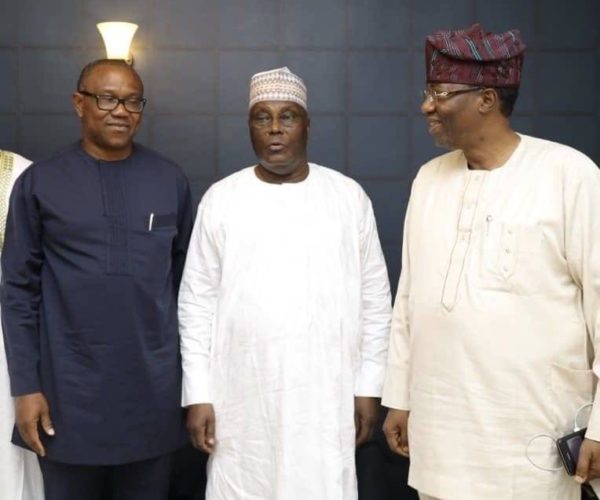 Stakeholders of the Peoples’ Democratic Party (PDP) in Orumba Federal Constituency, Anambra, have endorsed the presidential ticket of the party with Alhaji Atiku Abubakar and Chief Peter Obi as presidential and vice-presidential candidates.

The stakeholders endorsed their ticket in a communiqué issued at the end of their meeting in Awka on Monday.

The communiqué was signed by Chief Okechukwu Enekwe, Chairman, Chief Sopuluchukwu Nwafor, Secretary, Dr Rose Nwankwor woman leader and other leaders of the party in the Federal Constituency.

They described the choice of Obi as the running mate as well informed and called on party faithful across the country to lend their full support for their victory.

“We accept this as the best action for the best choice and agree that nothing would have been better than the Atiku/Obi ticket.

“It is a case of square pegs in square holes; Obi is a distinguished Nigerian who is eminently qualified for the position.

“He also has the capacity to mobilise all the votes required in the South-East Nigeria and beyond, to give victory to PDP in the 2019 Presidential elections.

“We, therefore, thanked Alhaji Atiku Abubakar for picking Obi who we know as man of uncommon integrity and ability,” they said.

The PDP stakeholders assured the party and its candidates of their massive support for their victories at the polls.

They applauded the national and state leadership of the party for conducting credible and acceptable primary elections.

They added that they accepted the outcome of all the primary elections in the constituency and promised to work for the victory of the candidates in the general elections.

“Having fully reviewed the just-concluded primary elections of the PDP from the State House of Assembly to the Presidential Primaries held in Port-Harcourt.

“In our assessment, they were the best so far in the country; there was high level transparency, fairness and total due process.

“We congratulate the local government executives, the state leadership led by Chief Ndubuisi Nwobu and the national executives under the chairmanship of Prince Uche Secondus for job well done,” the communique said.