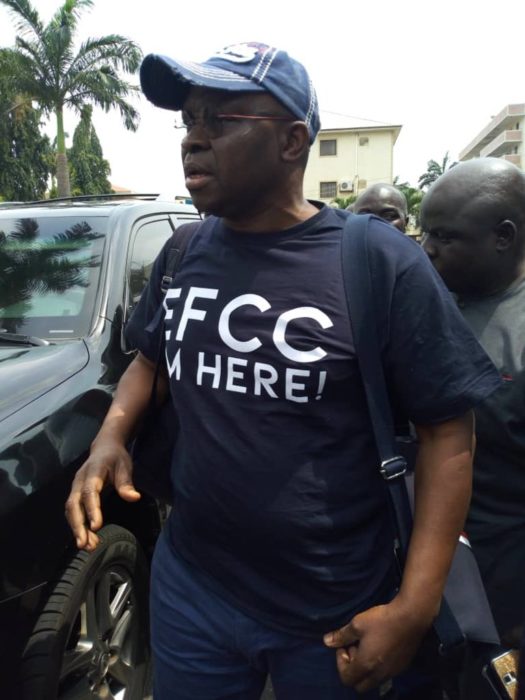 He was expected to run away, but former Governor of Ekiti State, Ayodele Fayose arrived the headquarters of the Economic and Financial Crimes Commission, EFCC, on Tuesday in branded T-shirt, with the inscription, “EFCC, I’m here.”

Fayose had been placed on watchlist while he still had immunity by the EFCC over alleged money laundering.

He was invited to report at EFCC on Tuesday, but he did it in grand style by announcing his arrival in a branded T-shirt.

The former governor was accompanied in his visit by the Governor of Rivers State, Nyesom Wike, and former Minister of Aviation, Femi Fani-Kayode.

According to Fayose, the EFCC had deployed its men in his home, even when he had shown willingness to report at the commission’s office on Tuesday.

Shortly before his arrival at the EFCC’s office, Fayose twitted: “In few minutes, I will be at the EFCC Old Office, Wuse 2, Abuja. I’m a man who stands by his words and I hope that after today, those President Buhari’s men that have been accused of corruption will also be bold enough to submit themselves to the @officialEFCC.”

Hundreds of journalist and Fayose’s supporters had throng the commission’s headquarters waiting for the former governor to arrive.

His appearance at the EFCC’s headquarters has certainly overshadowed Dr. Kayode Fayemi’s inauguration as Governor of Ekiti State.