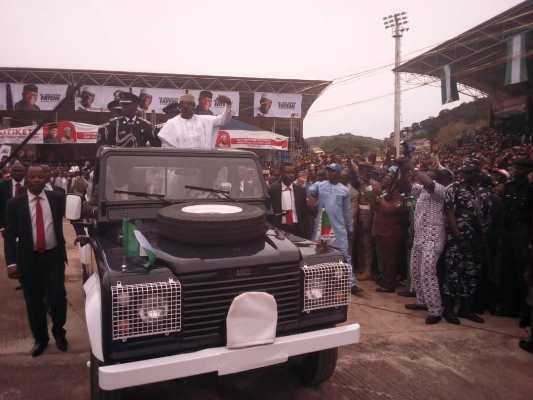 The huge crowd that graced Dr. Fayemi's inauguration as governor

Thousands of residents of Ekiti and members of the All Progressives Congress (APC) on Tuesday thronged the Ekiti Parapo Pavilion to witness the swearing-in of Dr Kayode Fayemi and Chief Adebisi Egbeyemi as Governor and Deputy Governor of the state.

Fayemi, a former Minister of Mines and Steel, was sworn in as the sixth governor of Ekiti, amid pomp and ceremony.

He was sworn in by the Chief Judge of Ekiti, Ayodeji Daramola.

The deputy governor, Adebisi Egbeyemi took oath of office at exactly noon, while Fayemi took his at 12:20 p.m., amid ovations from the crowd.

Fayemi served his first term as governor of the state between 2010 and 2014 under the platform of the defunct ACN.

The 14,000-seater pavilion was already filled to capacity as early as 8 a.m. by residents and party loyalists from the 16 local government areas of the state.

The early morning rain, which many regarded as a sign of good omen for the new government, did not stop people from attending the inauguration, as many were seen trekking long distances to get to the venue. 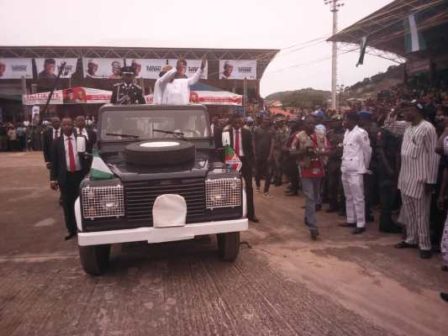 The Chairman of the Tricycle Association of Nigeria, Ekiti chapter, Mr Akinola Talabi-Ifa, had earlier declared that passengers going for the inauguration would be conveyed free of charge throughout the state as part of the union’s contribution to success of the exercise.

Most markets, shops and public offices were shut as traders and workers all moved to the pavilion to witness the ceremony.

Aside from those inside the Pavilion, several others stayed outside as they could not gain entry to the pavilion.

In carnival-like manner, men and women in different attires bearing the inscription and portrait of the new governor, sang his praises while dancing and drumming.

Security in and around the venue was tight as men of the Nigerian Army, police, Customs, Civil Defence and many other security personnel searched persons going into the venue at virtually all gates.

President Muhammadu Buhari was represented at the occasion by Secretary to the Government of the Federation, Boss Mustapha.