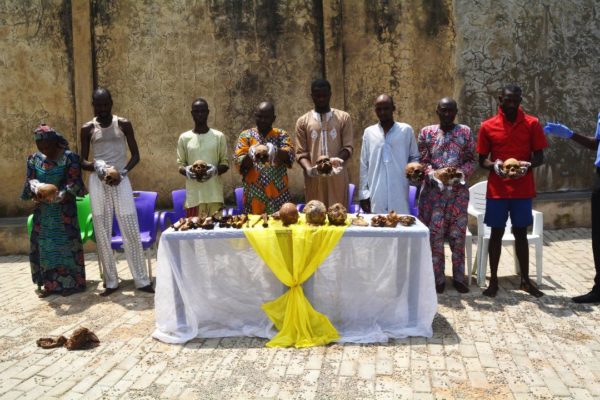 Eight suspected ritualists arrested by the police in Ilorin Kwara state have confessed selling 31 human heads to some yet-to-be identified prominent personalities in the country.

The suspects were busted by a Police Joint Investigative team, following the arrest of the principal suspect, Azeez Yakub, in whose house police found 11 human skulls, human bones, hairs, and powder suspected to be grinded human bones and charms.

Police searched Yakub’s home on 5 October following reports of missing persons, kidnapping, murder, killings for rituals, and exhuming of the dead, removal of human skulls and other human parts.

“The Police Joint Investigation Team on arrival in Ilorin, Kwara State on the 5th of October, 2018 assisted by the personnel of ‘D’ Divisional Police Headquarters, Adewole, Kwara Police Command, working on actionable intelligence from public spirited individuals in the area, swung into action, obtained search warrant and moved into the house of one Azeez Yakub.

Azeez Yakub a.k.a Baba Muri (Principal Suspect) who is a notorious armed robber and had been arrested, charged to court and convicted to prison several times. This suspect now in Police custody has made confessional statement to the Police investigation Team. He confessed and admitted that one Abdulfatai Kadri a.k.a (Adedoyin), the vigilante commander in Adeta Zone, introduced him to the business and also supplies the human skulls and other body parts for him to sell. Eleven (11) Human skulls were recovered from his possession during police search on his residence.

The principal suspect confessed that Abdulfatai Kadri has brought to him twenty (20) human skulls that he exhumed from the Ilorin Community Central Burial ground situated after Eid-praying ground in Ilorin.

He further admitted that Abdulfatai Kadri a.k.a (Adedoyin) usually brings in the human heads to him in batches of four, six and eight for safe keeping and usually collect them within a day or two, and also informed him of the personalities in Ilorin and others he usually supplied the heads.

Abdulrasaq Babamole was mentioned by the principal suspect, Azeez Yakub. Babamole was alleged to have bought one human skull from Yakub. Powder suspected to be pounded human bones was recovered in his possession. He has also confessed to the crime and admitted his role

Aishat Yunisa a.k.a Iya Alagbo was also mentioned by the principal suspect, Azeez Yakub to be a member of the gang. She deals in selling human body parts. During interrogation, she confessed and admitted to have supplied two human skulls she obtained from Azeez Yakub to one Ahmed Yahaya and Lukman Saka

Ahmed Yahaya and Lukeman Saka were indicted in the confessional statement made by the Principal suspect, Azeez Yakub. They confessed to have bought two human skulls from the principal suspect through Aishat Yunusa. They ground the skulls for rituals.

Abdulfatai Kadri a.k.a (Adedoyin) is a vigilante Commander in Adeta Zone. He was indicted by the Principal suspect as the man who introduced him to the business of selling human body parts. He was also the supplier of human skulls and other body parts to Yakub. He is still being investigated on his criminal roles in the incident.

Abdulganiyu Bamidele: He confessed and admitted to buying human skull from the principal suspect, Azeez Yakub and supplying same to his friend one Kayode still at large.