Nigeria, Norway to deepen ties as envoy calls on FG to tackle insecurity 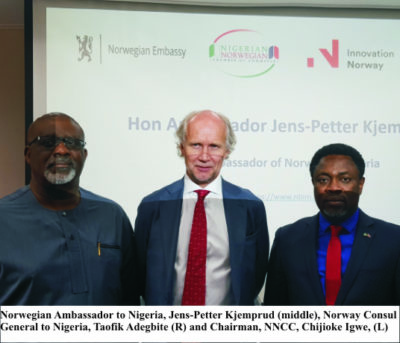 Considering the long-standing relations, especially on trade, that exist between Nigeria and Norway, the two countries have emphasised the need to deepen ties as the Norwegian ambassador to Nigeria, Jens-Petter Kjemprud called on federal government of Nigeria to tackle insecurity for greater development.

Speaking at a stakeholders’ meeting to present and promote the investment opportunities and incentives in Norway for Nigerian investors in Lagos, the envoy disclosed that there is huge potential of increasing the trade receipt between the two countries which currently stands at $30 billion.

He also stated that Norway is considering increasing investments in Nigeria’s oil and gas and similarly spoke on prospects in the country’s power sector.

“You need to have renewable energy take root in this country, you need to have the incentive not disincentives. The sector needs to be well regulated, organised and you have to attract investors. There is still a huge hydro power potential in Nigeria; we seem to have forgotten about that. We also have solar and wind power but the wind power cannot thrive because of insecurity.

“You cannot have wind power in the Gulf of Guinea if pirates are threatening ships. So it is about incentives and providing security.

“This is why we brought some of the most important business actors from Norway, innovation Norway, Nigerian Norwegian Chambers of Commerce, our new Consul General and the embassy-to get together as strong as possible to show what can be done in trade between both countries,” he said.

On his part, the new Norway Consul General to Nigeria and CEO of Marine Platforms, Mr. Taofik Adegbite, stated that the federal government needs to provide all the necessary support for the private sector players to unlock greater opportunities in the maritime sector; and strengthen the environment for businesses and bilateral relationships to get stronger.

“Many Nigerians have proven themselves and demonstrated excellent capacity through the instrumentality of the local content law in the oil and gas industry. That is a valid example that with the necessary support and proper frameworks the country can gain more from other sectors like the marine and its allied areas. There is a lot for both Norway and Nigeria to benefit from each other as trade allies with long history of engagement. But more can be achieved within an environment that is very conducive for Nigeria’s foreign partners and allies to operate”, he said.

Meanwhile the Chairman, Nigerian Norwegian Chambers of Commerce (NNCC), Mr. Chijioke Igwe, has called on Nigeria to learn from Norway which has been able to grow businesses despite their very tough environment.

He said the chamber is trying its best to tap into Norway’s resilience, discipline and find a way to have that reflect on Nigeria.

Nigeria is Norway’s largest trade partner in Africa and the country has sustained trade relations with Nigeria long before Nigeria’s independence in 1960.