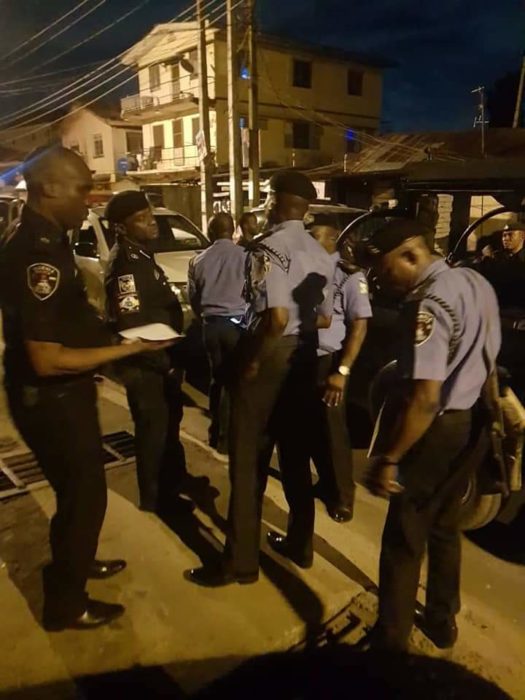 Policemen at the scene of the clash last night

Two notorious cultists have been killed and 21 other people arrested as rival cult groups clashed at a political gathering organised by an All Progressives Congress, APC, chieftain in Obanikoro area of Lagos, Southwest Nigeria.

The incident occurred on Wednesday evening at No. 228, Ikorodu Road by Obanikoro Way.

Police Public Relations Officer, PPRO, Lagos State, Chike Oti, in a statement on Thursday said at  about 5:15pm on Wednesday, the Divisional Police Officer in charge of Pedro Police Station, received a call that two persons, later identified as Ibrahim a.k.a Small Japron and one Solo, (surnames unknown), were killed at a political gathering organised by Hon. Ademorin Kuye at a place called Home Touch, situated at No. 228, Ikorodu Road by Obanikoro Way.

He said the deceased persons, who had been involved in several cult clashes, were on the wanted list of the police for leading several cult fights in the Shomolu, Bariga, Fadeyi and Ojuelegba areas of the state.

“They were trailed to the gathering by a rival cult group who invaded the arena and began to attack people. The fight was however brought to an end by the police who arrived quickly at the scene and made some arrests.

“Unfortunately for the notorious cultists, Ibrahim (a.k.a Japron) and Solo, they died as a result of injuries sustained during the fight,” he said.

Oti said the Police Command had on September 10, 2018, issued a press statement warning politicians not to gather in public places without notifying it to enable adequate provision of security and prevent hoodlums from hijacking such events.

“Regrettably, the host of the political meeting, Hon. Ademorin Kuye, did not inform the police of his intention to host his supporters.

“Meanwhile, 21 persons have so far been arrested in connection with the case and are currently been questioned by homicide detectives of the State Criminal Investigation and Intelligence Department (SCIID) Panti, Yaba. Also invited to Panti, is the politician, Hon. Ademorin Kuye,” added.

The PPRO said the Commissioner of Police, Lagos State, CP Imohimi Edgal had ordered a manhunt for the perpetrators of this dastardly act, vowing that the Command would  leave nothing to chance in ensuring that the authors of the crime were prosecuted.

He said the CP was urging politicians to inform the police before gathering in public places and stated that until the INEC gave the go ahead, political campaign at this time was illegal and that those in breach of the electoral law would be made to face the full wrath of the law.