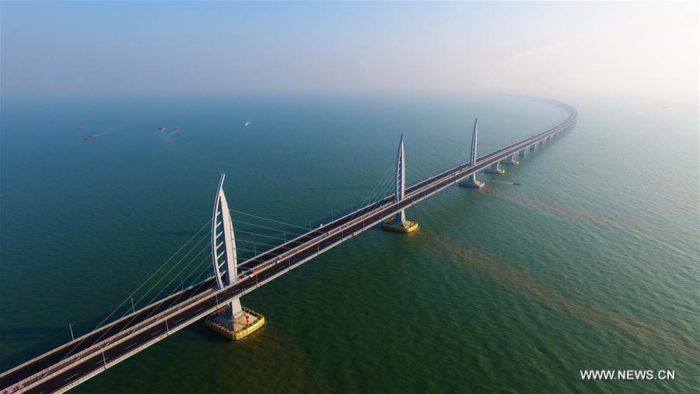 China will open the world’s longest sea bridge to traffic from next week. The 55-kilometre-long bridge linking Hong Kong, Zhuhai and Macao took six years of preparations and eight years to build.

Construction began on 15 December 2009 and is expected to slash travel time from Hongkong to mainland China from three hours to 30 minutes.

Major work on the bridge consisted of a 22.9-kilometre-long main bridge, a 6.7-kilometre-long tunnel and an artificial island off the bridge, which is considered the most technically demanding part of the whole construction.

Engineers and constructors have tested the coordination of the bridge’s various systems and equipment and the lighting fitted, according to Zhang Jinwen, project director with the Hong Kong-Zhuhai-Macao Bridge (HZMB) Authority.

In the past 14 years, the regional economy and transport network have undergone tremendous changes, leading authorities to re-assess the utilization rate of the bridge, said Su Yi, assistant to the chief of the HZMB Authority.

But Su dismissed worries that the bridge would not have enough traffic, saying, “we have full confidence for the future.”

“We have a whole toolbox of policies at our disposal,” Su said. “It is like playing cards. We can adjust our moves accordingly.”

The bridge will slash travel time between Hong Kong and Zhuhai from three hours to just 30 minutes, further integrating cities in the Pearl River Delta.