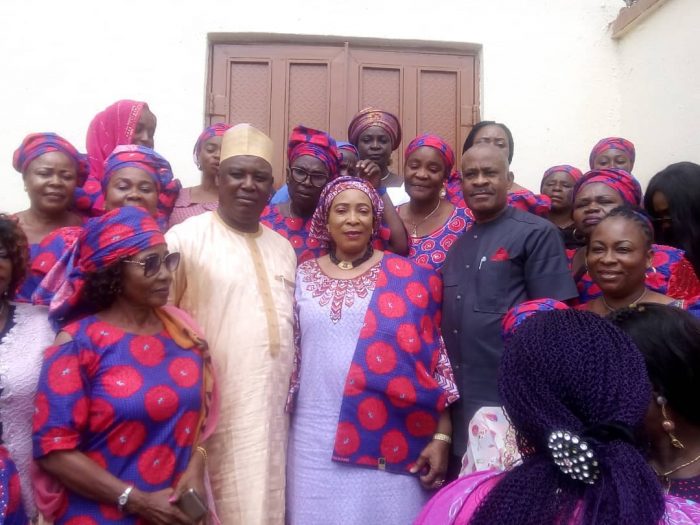 Members of the ITTA with Mrs Amina Titi Abubakar

The National Leadership of Intellectual Think Tank For Atiku (ITTA), a foremost campaign organisation has reiterated its commitment to rally support for the PDP Presidential Candidate Atiku Abubakar in the 774 Local Government Areas.

Evang. Theophilus Ohuoba, National Chairman, ITTA, who made the pledge during a courtesy call on Chief Mrs Amina Titi Abubakar, at her Maitama residence in Abuja on Thursday said the group was already mobilizing for the poll.

Ohuoba said the essence of the visit was to congratulate and celebrate with her on the peaceful and transparent conduct of the PDP Presidential primaries which saw her husband Atiku emerge as presidential candidate.

The National Chairman said members of the group would work in all the wards nationwide to ensure Atiku’s victory as the President and commander-in-chief of the Federal Republic of Nigeria come 2019 general election.

He lauded Titi for her unrelenting support for her husband which showed she was indeed a good wife and pillar behind the successful political carrier of Alhaji Atiku Abubakar .

The national chairman enjoined Nigerians to continue to pray for long life and good health for Atiku and his entire family and also reminded the Nation that a vote for “Atikuobi 2019” would be a vote for Economic growth and prosperity.

He said job creation for our teaming youth, Security of lives and Properties of Citizens would be guaranteed.

“Restructuring of Nigeria, unifying the nation by running an all-inclusive government, ensuring the rule of law prevails and the supremacy of the constitution, in effect is a vote to get Nigeria working again,” he said.

In her remark, Titi welcomed the National chairman and expressed her appreciation to ITTA for the visit.

She urged the group to work towards its vision for a better Nigeria.

Titi used the opportunity to thank ITTA for all the nationwide support it had galvanised towards the realisation of her husband’s ambition of assuming the office of the President in the 2019 Presidential election.

She further called for prayers for the peace and unity of the nation as the 2019 general elections approached.

ITTA is a national political campaign organisation working for the actualisation of the ambition of Alhaji Atiku Abubakar in the 2019 Presidential election.