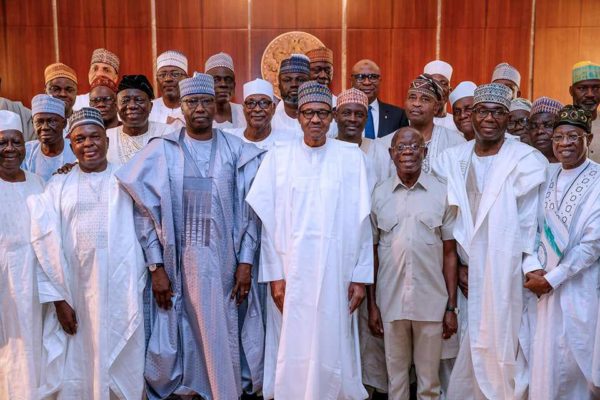 Buhari hosts APC aspirants. Above Buhari posing with APC stakeholders from Kwara; standing beside the president on the left is SGF Boss Mustapha and on the right, APC Chairman Adams Oshiomhole

President Muhammadu Buhari on Tuesday hosted aggrieved aspirants of the All Progressives Congress (APC) in the just concluded party’s primaries across the country.

Those in attendance at the dinner included aggrieved gubernatorial, National and State Assembly aspirants who failed to secure the party’s tickets in the forthcoming 2019 general elections.

The meeting was also attended by Secretary to the Government of the Federation, Mr Boss Mustapha, cabinet ministers and other presidential aides.

The president had on Oct. 13 met with aggrieved members of the House of Representatives under the platform of the APC.

Buhari also met collectively and separately with aggrieved serving APC governors who expressed reservations over the conduct of the party’s primaries in their respective states.

Prominent among the aggrieved governors are Abdulaziz Yari of Zamfara, Ibikunle Amosun of Ogun and Rochas Okorocha of Imo.

The National Chairman of the APC, Comrade Adams Oshiomhole, had on Oct. 21, in a statement by his press secretary, Mr Simon Ebegbulem, alleged that conservatives within the party are ganging up to pass a vote of no-confidence on him.