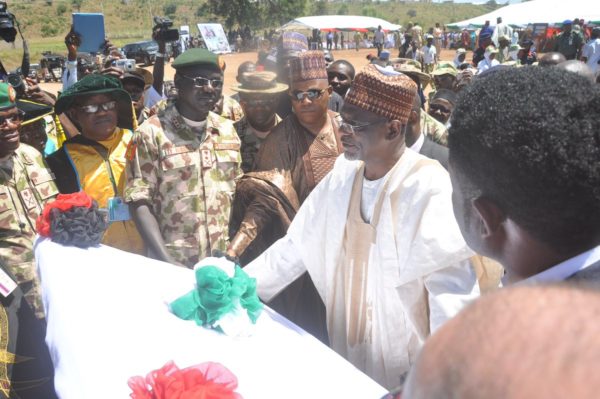 He said the establishment of the university would be of immense benefit not only to the military but also to the country.

“I particularly consider this event very epochal and a turning point in the annals of the Nigerian Army with regards to education, intellectual development and troop preparedness in the 21st century.

“I commend the Nigerian Army for the commencement of the university which will serve as the brain box for enhancing its responses to meet the challenges of the 21 century.

“As a government; we believed in harnessing the full potential of education especially at the higher level, to overcome multiple challenges from corruption and challenges of insecurity,” he said.

Buhari said his administration had accorded priority to reinvigorating the education sector and approved the establishment of additional universities and institutions of higher learning in the past three years in the country.

“Since we came on board we have increased access by establishing new universities at the federal, state and private level.

“We have also approved the establishment of eight state and 15 private universities since we assumed office,” he said, adding that the government had also approved various degree awarding institutions in the country.

Prof. David Malgwi, the Acting Vice Chancellor of the university, described the project as part of the successes recorded in the war against insurgency in the country.

Malgwi noted that the project clearly indicated government commitment to the Reconstruction, Rehabilitation and Resettlement (RRR) in the region that was bedeviled by insurgency.

“The University represents the future of Nigeria’s self-reliance in the area of science, technology, research and capacity building training in all fields of human endeavor through the application of modern teaching approaches to equip students with tools to live and work in the 21 century,” he said.

He disclosed that the university was billed to commence academic activities in 2018/2019 academic session in five faculties and 39 programmes, adding that admission began in collaboration with the Joint Admissions and Matriculation Board (JAMB).

According to the acting vice chancellor, the institute was designed to operate with 14 faculties, 113 departments and 493 programmes.

He called on the government to ensure adequate funding of the university to enable to achieve its objectives.

Malgwi also called for the rehabilitation of major high roads linking the university with adjourning communities to enhance its operations.

The Chief of Army Staff, Lt.Gen. Tukur Burutai, disclosed that N2 billion was provided for the take-off of the university project.

He noted that the aim of the institution was to build the capacity of the Nigerian Army to enable it to compete with other armies in the world.

“The university is designed to create the critical mass required for research, innovations, testing and development of military equipment in the 21st century setting,” he said.

The chief of army staff commended the Federal Government over its support to the military to enable it to discharge its duties effectively.

The occasion was attended by Governors Kashim Shettima of Borno, and Ibrahim Dankwambo of Gombe State, and Sen. Ali Ndume, among others.

Others were: the Shehu of Borno, Alhaji Idris Garbai El-Kanemi; the Shehu of Dikwa, Muhammad Ibn Masta II; the Emir of Bauchi, Alhaji Rirwanu Adamu, Emir of Biu, Mai Mustapha Umar Aliyu, among others.