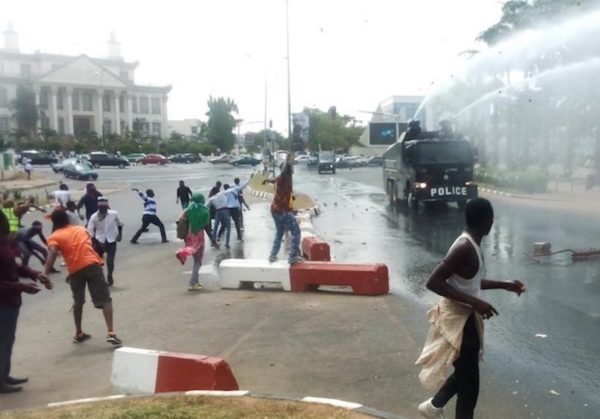 Police in Federal Capital Territory (FCT) said 400 members of Islamic Movement of Nigeria (IMN), also known as Shi’ites, had been arrested in connection with Tuesday’s violent protest in the territory.

Commissioner of Police in the area, Mr Bala Ciroma, stated this when he presented the suspects to the media at the command’s headquarters in Abuja on Tuesday.

He said that the suspects had been detained for discreet investigation, adding that dangerous weapons were also recovered from them.

He said that the police recovered 31 bottles of petrol bombs and other dangerous weapons brought in the territory by the suspects.

Ciroma said that among the suspects was their “First Aider”, one Salahuddeen Ahmad, male, 23, who hails from Illela Local Government of Sokoto State.

He said that all the suspects would be arraigned upon conclusion of investigation.

The commissioner said that arrest of the sect members as part of the continuous efforts of the command to provide residents of the territory with adequate security, protect lives and property and prevent breakdown of law and order.

He stated that the command intercepted and arrested some members of “the EL-Zakzakky Islamic Movement of Nigeria with 31 bottles of petrol bomb and other dangerous weapons being ferried into FCT by their members.

“It is for the purpose of causing mayhem and attack on innocent citizens, including law enforcement agents deployed to protect lives and property.’’

According to him, members of the group without provocation of any sort went on rampage during a protest and burnt down a police vehicle.

He said that the incident occurred on Tuesday and that the sect burnt a Police Rapid Response Squad (RRS) patrol vehicle deployed at Ademola Adetokumbo Crescent.

Ciroma explained that at 12.30 p.m., operatives on stop-and-search duty along Tipper Garage area, intercepted and arrested one Mustapha Abdullahi, male, 20, of Ungwan Gwari, Suleja, with 18 bottles of petrol bombs concealed in a traveling bag.

“To smuggle himself and the patrol bombs into the city, he disguised as a passenger and boarded a taxi with other unsuspecting passengers,” he said.

He said that Abdullahi ran out of luck when vigilant policemen on duty at the point “upon reasonable suspicion’’ intercepted the cab and conducted a search on the only bag in the car and found the improvised bombs.

He said that the suspect was immediately arrested, adding that he would be arraigned at the end of investigation.

The commissioner added that one Abdullahi Umar, 22, was also nabbed with a bag containing 13 well packaged bottles of petrol bomb.

“During investigation, the suspect confessed that he arrived Suleja from Sokoto State on Sunday to join other members of their sect for protest.

“He also confessed that he was ferrying the patrol bomb to FCT to confront law enforcement agents,” he said.

Ciroma said that one lighter was also recovered from the suspect, adding that he would also be arraigned soon.

Speaking to newsmen, one of the suspects, Mustapha Abdullahi, said that the bottles contained petrol.

According to him, at the time of my arrest, I didn’t do anything with the bottles of petrol.

“I came to Abuja to use it to break stone but today something happened in Abuja and they blocked me on the road and arrested me,” he said.

Abdullahi admitted that the police recovered 18 bottles of the petrol bombs from him, saying “I am a member of the Shi’ite,” he said.

Another suspect, Abdullahi Umar, said “I don’t have any mission, I just wanted to defend myself with it.

“On Saturday at Zuba, soldiers came and started shooting us, we didn’t do anything to them.”

While explaining their activities, Umar said “if they start shooting us, I will just put it on the grass then I will put fire on the grass so that our brothers will get way to escape. I came into Abuja from Sokoto.’’