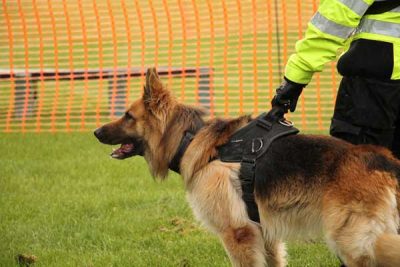 Sniff dogs could be trained to detect malaria in people infected with the disease even if they are not showing symptoms, according to a new study by Durham University.

“While our findings are at an early stage, in principle we have shown that dogs could be trained to detect malaria infected people by their odour with a credible degree of accuracy,” Steven Lindsay, lead researcher from Durham University, said in a press release.

Researchers from the Medical Research Council Unit of The Gambia and the London School of Hygiene and Tropical Medicine used nylon socks to collect foot odour samples from apparently healthy children aged five to 14 in the Upper River Region of The Gambia in West Africa.

A total of 175 sock samples were tested, including those of 30 malaria-positive children identified by the study using finger-prick tests and 145 from uninfected children.

The sock samples were then transported to Britain where dogs were trained to distinguish between the scent of children infected with malaria parasites and those who were uninfected.

According to the researchers, the dogs were able to correctly identify 70 per cent of the malaria-infected samples.

They were also able to correctly identify 90 per cent of the samples without malaria parasites.

The study, presented Monday at the American Society of Tropical Medicine and Hygiene Annual Meeting in the U.S. city of New Orleans, could potentially lead to the first rapid and non-invasive test for malaria.

The researchers believe that artificial odor sensors might be developed in the future to detect malaria parasites, but until then trained dogs could be a useful alternative at ports of entry.

According to the World Health Organisation’s latest World Malaria Report, there were an estimated 216 million cases of malaria in 2016, an increase of five million cases over the previous year.

Deaths reached 445,000, a similar number to the previous year.