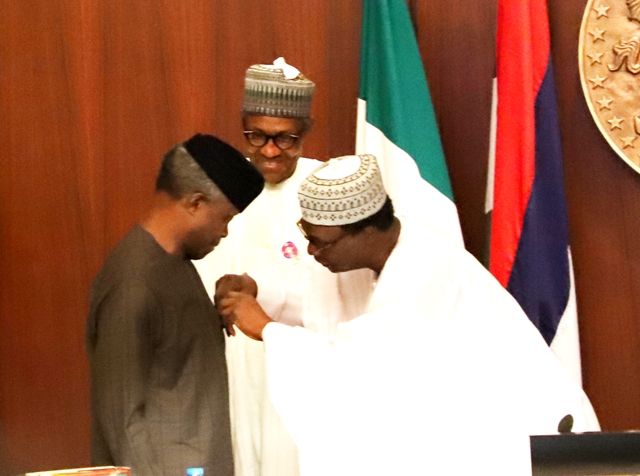 President Muhammadu Buhari on Wednesday inaugurated the 2019 Armed Forces Remembrance Day Celebration Emblem with an appeal to Nigerian politicians to be decorous in their conduct and utterances in order not to fan the embers of disunity.

Buhari inaugurated the emblem and appeal fund for the support of Nigerian veterans and fallen heroes with N10 million, before the commencement of the Federal Executive Council (FEC) at the Presidential Villa, Abuja.

He said that political actors would have no country to lead if their acts of deliberate incitement were to lead to the disintegration of “our dear nation”.

“There is the need for our political actors in particular to be decorous in their conduct and utterances in order not to fan the embers of disunity.

“We would have no country to lead if our acts of deliberate incitement lead to the disintegration of our dear nation.

“Let us put Nigeria first and realise that in every contest there must be one winner.

“The nation is appreciative of the gallantry and sacrifices of officers and men of our armed forces in the campaign against insurgency and other internal security operations.’’

Buhari reminded the country that the celebration was a painful reminder of the perils of war and the need for the nation to avoid a recurrence.

He said: “The celebration forcefully reminds us of the resolve of our citizens to remain in one united country, Nigeria.

“It also points out the fact that we had been through a bitter and unfortunate war that led to the loss of millions of our compatriots and the need to do all within our powers to avoid a recurrence of war.’’

The President also used the occasion to appreciate the gallantry and sacrifices of the Nigerian Armed Forces in the campaign against insurgency and other internal security operations.

While noting that the efforts of the armed forces have led to the return of normalcy in affected parts of the nation, the President regretted the recent murder of two young and promising aid workers; Saifura Khorsa and Hauwa Liman by Boko Haram terrorists.

“It is painful that this happened despite all the efforts of government to effect release of the two victims.

“We condemn the callous and cowardly act in its entirety and call on all citizens and friends to forge a united front against this common enemy of our destiny.

“Once more, I extend the heartfelt condolences of the Government and people of Nigeria to the families and friends of these martyrs,’’ Buhari said.

He pledged that the resettlement and rehabilitation of citizens affected by the war on terror would continue.

He commended Dangote Foundation for its partnership with government in the rebuilding process in Borno.

The President, therefore, called on other corporate organisations to borrow a leaf from this noble initiative as Government alone cannot satisfy all the needs, given her limited resources.

He also expressed delight that businesses operating in Nigeria are beginning to give special consideration to members of the Armed Forces and veterans.

“Specifically, some airlines operating in Nigeria offer discounts to members of the Armed Forces.

“This gesture is commendable and in line with my call for recognition, consideration and appreciation of our Armed Forces.

“I urge more business ventures to chip in by assisting the Security Forces in whatever way they can,’’ he said.

He also thanked charity organisations for taking up the task of catering for the welfare of veterans and members of the armed forces.

He added that, “the nation owe a debt of gratitude to men and women of the armed forces who have the responsibility of securing the Nation, and ensuring a conducive environment for businesses to thrive.’’

On the Bill to amend the Nigerian Legion Act to a proposed “Veterans Federation of Nigeria” Act, the President urged the 8th National Assembly to give the proposed legislation, which seeks to ensure proper welfare and health condition of military veterans, quick attention.

“As Grand Patron of the Nigerian Legion (Veterans), I wish to pledge my continued support and that of the Federal Government to the organisation.

“My appreciation goes to State Governors who are patrons in their respective states for the support they are giving to the Legion. I enjoin them not to relent but improve on this,’’ he said.

President Buhari called on all Nigerians and others resident in Nigeria to procure and wear the emblems with pride to identify with those who laid down their lives for peace and security of our fatherland.

The highlight of the event was the decoration of President Buhari and Vice-President Yemi Osinbajo with the 2019 emblems.

The event was also witnessed by the Speaker of the House of Representatives, Yakubu Dogara, members of the Federal Executive Council, Chief of Defence Staff, General Abayomi Olonisakin, service chiefs and the Inspector General of Police, Ibrahim Idris, senior officers and veterans.