Chibok girls: Only 6, not 57 sighted in Sambisa Forest, Parents cry out 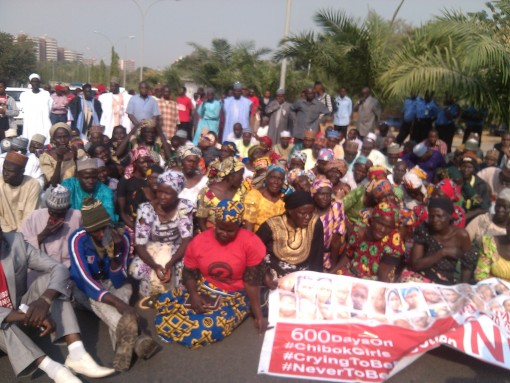 Parents of Chibok girls during a peaceful march

Parents of the abducted Chibok school girls on Tuesday said only six girls were sighted in Sambisa Forest as against 57 indicated by media reports quoting one of the parents.

The Spokesperson of the parents, Mr Ayuba Alamson, told newsmen in Maiduguri that the lady who escaped from the Boko Haram captivity, claimed to have stayed with only six girls in the forest.

Alamson, who identified the lady as Jummai Abouku, said the lady escaped from the Boko Haram insurgents and was released recently by the military to her family after profiling and screening.

According to him, “Jummai, a mother of six was abducted together with her elder son by the insurgents at Askira Uba in 2014.”

Alamson explained that the escapee told the parents that she stayed with six of the girls in Sambisa Forest, adding that she had also identified the girls and their parents.

He said: “Jumai told us that six of the girls were married to the insurgents, one of them is pregnant with one child and another one has a baby, while the remaining four were married without children.

“Few months before her escape, Jumai was also forced to marry one of the insurgents and she is now pregnant.

“She escaped with her son and stayed in a camp in Bama, before they were released to their family in Chibok.

“This is what she narrated to us and we do not know the source of the information about the 57 girls sighted in Cameroon.

”We are happy over the development, it rekindles our hope that the remaining girls in the insurgents’ captivity are alive and would be released.”

He commended the Federal Government over the release of the over 100 abducted school girls.

Alamson called on government and international organisations to secure the release of the remaining girls including Leah Sheribu.

However, Mr Yakubu Nkenke, the Chairman, Parents of the Abducted School Girls, was quoted in a media report as saying that 57 of the girls were sighted in northern Cameroon.

Nkenke disclosed that the girls were seen by other female captives at Garin Magaji and Garin Mallam villages of Marwa district, Cameroon.

Nkenke revealed that seven of the girls were at Garin Magaji, and 50 others stays with their husbands and children at Garin Mallam.

When contacted by the News Agency of Nigeria (NAN) he insisted on the 57 figure of the sighted girls.

”What we should be looking at is how to rescue the girls. Their locations has been revealed for the government to secure their release,” he told NAN.