The Continued Mishandling of the Shi’ite Crisis 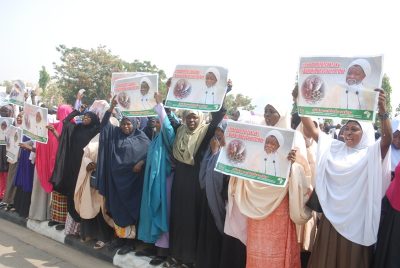 The Shi’ites are not the problem. Impunity is. Protest is not the problem. Violence and trampling on the rights of others is. It is crucial in any democracy to have and preserve the right of peaceful protest. In the Nigerian Constitution, citizens and residents have the rights to: peaceful assembly; freedom of expression; freedom of thought, conscience and religion; and the right to privacy. As citizens, we all must know our rights, protect it and stand as protectors of the rights of others, as guaranteed in the Constitution. The right to freedom of peaceful assembly and to freedom of association with others; including the right to form and join unions, belong to societies, be part of religious bodies, for the protection of our interests is basic and MUST BE RESPECTED. Based on our Constitution, there are no restrictions on the exercise of these rights other than those prescribed by law and are necessary in a democratic society, in the interest of national security or public safety, for the prevention of disorder or crime, for the protection of health or morals or for the protection of the rights and freedoms of others.

This is a time of anger. Nigerians are frustrated and are lashing out at every opportunity. The level of impunity from top to bottom has come to haunt us. The level of impunity can be measured in how we conduct ourselves in public, evident in how we express dissatisfaction as citizens, and how those we put in leadership handle dissent and protest. Unfortunately, we have set the country up in the wrong way. People will grow increasingly mercurial as population booms and opportunities dwindle. More and more, Nigerians will seek refuge in strange identities and tribalisations. If we are serious at all, it is time for the government to begin a reorientation of law enforcement as a precursor to the survival of this republic. The schisms are too deep to ignore. The monetisation and stratification of justice has made it an existential imperative to uphold the rule of law. In any conflict, nothing trump’s dialogue. Mass information must be embarked upon to reinforce the sovereignty of the state and the state must discharge its responsibility duly. Citizens, through their leaders,must be educated that the rights of individuals or groups do not include the freedom to rampage through residential areas; to block the movement of people, goods and services; to incite violence, damage property or intimidate locals and those with different beliefs. The country is bigger than any one or group. The Constitution does not prevent the imposition of lawful restrictions on the exercise of these rights by members of the armed forces, of the police or of the administration of the state.

The handling of the Shi’ite minority in a country where Muslims are 98 per cent Sunnis, calls for carefulness. The Shi’ites in Nigeria, based on reports from residents who have been at the receiving end of their lawless attitude for years, have been left to operate outside the law for too long. The reason is that we politicise religion, and for the sake of votes, politicians court the clergy or at least buy their indifference. In turn, the clergy assume they are above the law because those in leadership need them. When we bend the rule to favour ourselves, we must also bend it when it does not. The secret to peace is to be just, equitable and fair. We need to rethink our law enforcement and retrain and equip the police. Maintaining peace internally is not the job of the armed forces. It is an overkill that will always end in tears and sorrow and a circle of violence. Dialogue and engagement are cheaper and better alternatives. Where the actors are unwilling to toe the honourable path, they can be charged and prosecuted in an open and fair trial.

The clampdown on Shi’ites cannot cure them of their lawlessness. Hatred for them for not being Sunnis will solve nothing. If the executive is not intent on birthing another terror group in Nigeria, there must be a change of tactic. Zealotry can be tamed with negotiation and dialogue. Under our laws, there is no express prohibition on how many people can come together in any one place at any one time. The police, not the army, have the institutional power to ensure that any person protesting or is part of an assembly does not cause any harm or violence to the public or them as agents of law enforcement. The Shi’ites, like most religious bodies, have their own police, which they respect more than the Federal law enforcement. This is so because the government cannot be trusted in being equitable, just and fair. It is true that the police are often found to abuse their powers during demonstrations by telling protestors what to do. Sadly, that is an overreach and it is the nature of the power in Nigeria, and even elsewhere.

Suppression will breed armed struggle which we can ill-afford. We are in a democracy. We need to shed the garb of our militarist past. Instead of brute force, our law enforcement agencies need to learn how to manage protests. Especially religious protests, given the existing deep suspicions. We can have an executive order proclaiming that every moving protest must negotiate routes, conditions and make arrangements for stewarding and policing. To get a protest permit, organisers can be required to sign that anyone participating in the procession who seeks to prevent the police or members helping the police from regulating the procession, causing public disorder, capable of causing damage to property, creating disruption to the life of the community or intimidating others is committing an arrestable offense. It is very important to regulate processions and assemblies with the the potential to incite hatred and cause harm. The right to freedom of expression does not include inciting hatred. No one should be allowed in a protest to publish or distribute books, pamphlets, tracts, fliers or any material that may be deemed as abusive, inciteful, threatening or insulting to any individual or group. For once we should be committed to doing the right things and doing things right. It will help everyone. Release El-Zakzaky. Do not make him a matyr.

Bámidélé Adémólá-Olátéjú is a farmer, youth advocate and political analyst.

Tags:   The Continued Mishandling of the Shi’ite Crisis