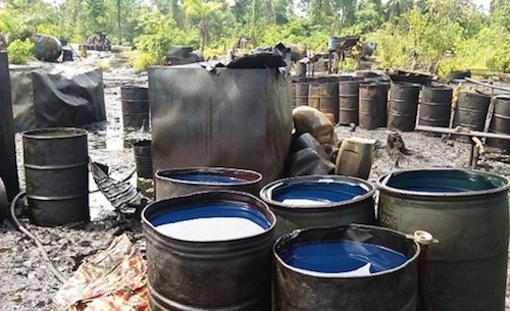 The Abia command of the Nigerian Security and Civil Defence Corps (NSCDC) has arrested 11 persons for allegedly engaging in illegal oil bunkering.

The state Commandant, Mr. Nnamdi Nwannukwu, disclosed this on Wednesday in Umuahia while briefing newsmen on the activities of the command.

Nwannukwu said that the suspects were arrested at different times and locations in the state, while transporting illegally refined diesel.

He said that two of the suspects, Johnson Idika and Odechi Mbamara, were arrested in an ash-colour Honda Odessey, loaded with 120 liters of diesel concealed in cellophane bags.

The command also arrested one David Isaac for allegedly transporting 4,500 liters of diesel.

He said that the suspects were arrested at Umuikaa Junction on the Enugu-Port Harcourt Expressway on Oct. 29.

The commandant said that at the point of their arrest, the suspects could not produce waybill covering the products, “which shows that the products were illegally procured.”

He said: “The activities of vandals are depleting the nation’s economy and the command under my watch will leave no stone unturned in the attempt to end the problem .

According to him, “adulterated gas is potentially dangerous to human health, especially the end users.”

Reacting to the allegations in an interview with newsmen, two of the suspects, Mbamara and Isaac, claimed they were innocent.

Mbamara said that he bought the product at a cheaper rate from petroleum tanker drivers at Eleme in Rivers for his personal use.

Isaac said that he was a victim of circumstance, adding that the truck driver, now at large, was giving him a lift from Port Harcourt to Abia, when they were arrested by Civi Defence operatives.

He claimed that he was not aware that the truck was carrying illegal petroleum products and appealed to the command to let him off the hook.

Nwannukwu said that the suspects would be arraigned at the end of the ongoing investigation.

He admonished Abia youths to engage in legitimate means of livelihood and shun illegal bunkering and pipeline vandalism.