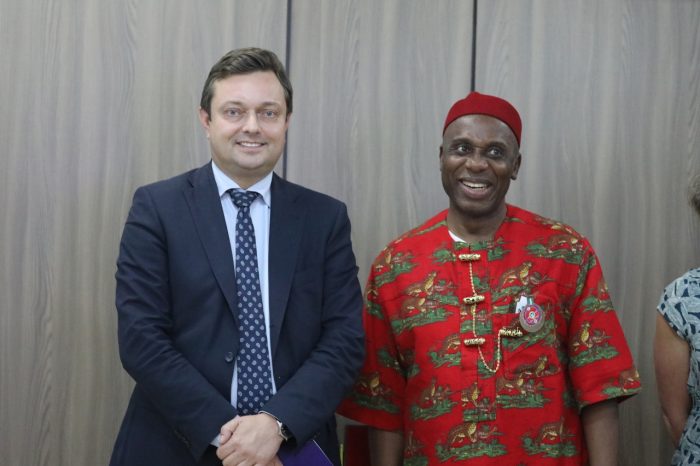 The Director General of the President Muhammadu Buhari Campaign Organisation and Minister of Transportation, Rotimi Amaechi, has assured the European Union (EU) that the ruling All Progressives Congress (APC) would adhere strictly to the electoral laws in the forthcoming 2019 general elections.

Amaechi also assured that President Muhammadu Buhari will accept the outcome of the elections that will be conducted by the electoral umpire.

The Buhari henchman gave the assurances when he received in audience the European Union delegation to Nigeria and ECOWAS in Abuja, Wednesday.

Amaechi said, “One assurance I will give you today is that we’ll stand by the Independent National Electoral Commission, INEC and we will stand by whatever decision they make. We believe that we promised Nigerians change and I also believe that you can observe the change.”

He recalled that at the peak of the 2015 general elections when he was still a serving governor, the former administration of President Goodluck Jonathan stripped him of his security detail and exposed him to series of attacks.

“By this time in 2014/2015, when I was still in office as governor, I was on fire. Everybody was on my neck. The then President had withdrawn my security. My ADC and CSO were on the run, there was no police security and nobody cared. They didn’t bother that I could be killed or attacked. I was attacked severally, I was attacked in Port Harcourt. But now, we believe the President that they were accusing that would be undemocratic because he is a retired Soldier is more democratic than a civilian that was elected in the past.

“During the Anambra State election, when the governor cried out that his ADC had been withdrawn, President Buhari ordered that the governor’s ADC be reinstated immediately. So you see, that is the change we are talking about.

“So the assurance I will give you from President Buhari Campaign Organisation is that there will be no interference by the President. We’ll play by the rules and whatever the campaign team needs to do to ensure that the election is transparent, we will do. We’ll also ensure that the election is such that Nigerians will be proud of, and we hope that the rest who are contesting in other parties will also take the same position,” Amaechi stated.

Earlier, Ambassador Ketil Karlsen, Head of the European Union delegation to Nigeria and ECOWAS, explained that the EU would partner with Nigerians to organise credible polls in 2019.

He noted that the EU, was only concerned about the best electoral practices for Nigeria.

“For the EU, we really do not have any preferred candidate, we don’t have any preferred political party, we don’t promote any particular ideology in Nigeria. We are very concerned about having the best possible process in the country. We want to see free, fair, credible and peaceful election. So this is why we have invested not only our time but also a lot of European tax payers’ money on engaging with all the Nigerian stakeholders since 1999.

“We have spent more than One hundred million Euros in giving support for electoral process. So currently, we support INEC, we support the National Assembly, we support intra-party democracy and we support all stakeholders. We had also engaged actively in the party primaries and this gives us reason about the optimism of INEC to conduct elections,” Karlsen said.