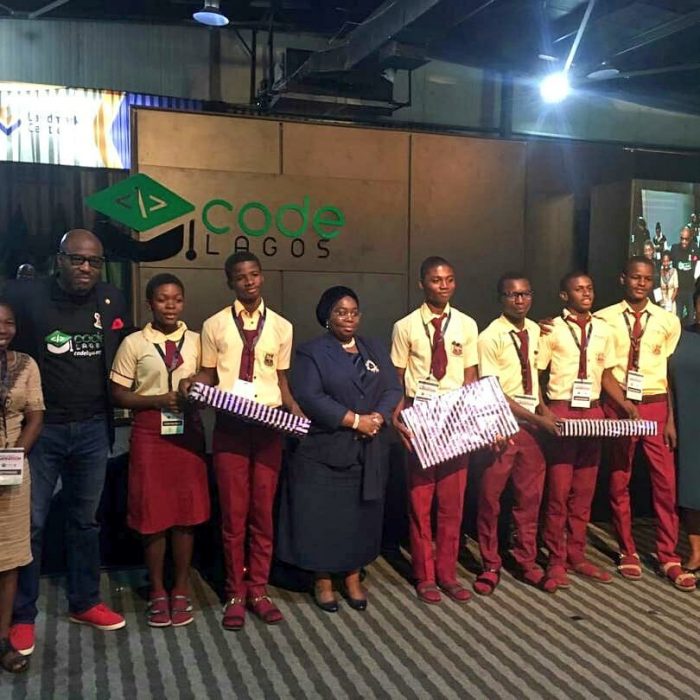 Lots of activities in Lagos during December: Deputy Governor of Lagos, Dr. Idiat Adebule with the winners of the competition

The preliminary stage of the competition commenced with 18 schools from the six educational districts of Lagos, after which six schools participated at the finals.

The app is aimed at enhancing waste management and recycling channels by connecting Lagos residents with waste disposal and recycling agents.

‘Code Lagos’ is a programming training initiated by the Lagos State Ministry of Education, implemented by the office of the Special Adviser to the Governor on Education.

Gov. Akinwumi Ambode of Lagos, in his address, said the initiative was in line with the mandate of making Lagos a ‘smart city’.

He said the state government was committed to reaching its goal by making coding knowledge available to one million Lagosians.

“This competition is a fulfillment of our collective dream of turning Lagos into a smart city that is compliant with best global practices so as to enjoy the benefits of technology.

“Global socio-economic and infrastructure development is knowledge-driven in contemporary times and Lagos State cannot afford to be left behind.

“We have commenced proactive policies to drive economic and infrastructure development with the active participation of residents in the programme.

“The results of the Code Lagos Hackathon competition will justify our strong belief in adopting technology as a vehicle to deliver strategic development for the benefit of the people.

“I strongly believe that the Code Lagos Hackathon competition will record major success with the discovery of the next generation of computer geniuses.

“This generation will lead the charge of establishing Lagos State as the technology development hub for the African continent, said Ambode, who was represented by his deputy, Mrs Idiat Adebule.

Also, Mr Obafela Bank-Olemoh, the Special Adviser to Gov. Ambode on Education, expressed delight with the level of intelligence participants displayed throughout the programme.

He lauded Gov. Ambode for launching the initiative two years ago, restating the state government’s commitment toward training one million Lagos residents by 2020.

“This is the first Hackathon competition to celebrate two years of Code Lagos.

“For Lagos to run efficiently, technology must be included.

“Seeing the kind of apps our students are developing, we are confident that we are on the right path in ensuring a smarter Lagos.

“We have technology companies who are willing to nurture these young minds and we rest assured that they are in the right hands,” he said.

Chidioke Gabriel, one of the representatives of Badagry Senior High School, expressed gratitude to the Lagos State Government for the opportunity to participate in the programme.

“We thought of the possible ways to address the waste management challenge in Lagos State and we decided that a recycling app would help solve the problem.

“The app enables Lagosians to sell and dispose their waste for recycling effectively,” he said.