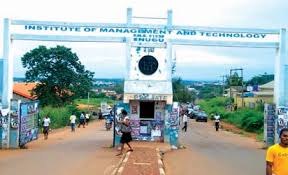 The Enugu State Government has released N810 million to the Institute of Management and Technology (IMT), Enugu for infrastructure development to encourage reading and learning.

The Rector of the institution, Prof. Austine Nweze, made this known in Enugu on Thursday in Enugu when members of the Enugu State House of Assembly Committee on Education visited the institution, as part of their quarterly oversight function.

Nweze said that since his administration came on board in 2016, IMT came 29 out of 112 polytechnics in the country in a test conducted by the supervisory body.

He explained that with all support given to the institution by Gov. Ifeanyi Ugwuanyi of Enugu State, IMT took seventh position out of the same 112 this year in the test among polytechnics in the country.

Nweze said that the management would do everything humanly possible to ensure that the polytechnic take first position; both at the state and federal in 2019.

He said that the polytechnic had implemented 2018 budget in terms of recurrent expenditure and up to date in terms of workers’ salaries.

The Rector said that the monthly subvention of the institution was N120m while the monthly wage bill was N200 million with 12, 000 students paying N40, 000 as school fees per session.

The rector said that the state government had released N25.5 million to the institution to purchase five fairly used vehicles for the management staff.

He said that the management, however, thought it wise to channel the money to another pressing issue- re-accreditation of 43 programmes of the institution.

Nweze said that the institution still lacked perimeter facing of the polytechnic due to limited resources.

In his remark, The Chairman of the Committee, Mr Mathew Ugwueze, commended the governor for the support he was giving tertiary institutions in the state.

Ugwueze called on the management of the institution to put more interest in vocational studies, reminding them that the world was moving toward vocation.

He also urged the stakeholders in education industry to put more effort in making sure that education thrived in the state.