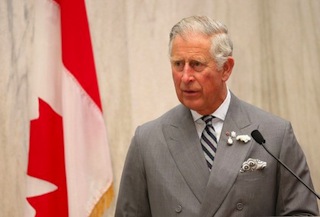 Prince Charles, Prince of Wales after being presented with the Symonds Medal by Professor Symonds as he visits Province House on May 20, 2014 in Charlottetown, Canada

Britain’s Prince Charles congratulated Gambia on Thursday for turning its back on “autocratic” rule at home and returning to the Commonwealth fold as he began a nine-day Africa tour.

“We are friends and partners, and once again we are both members of the Commonwealth family of nations,” the prince said at a ceremony in Banjul’s McCarthy Square, hosted by President Adama Barrow.

Gambia, he said, was “turning its back on 20 years of autocratic rule in order to embrace a new beginning,” he said.

Jammeh, who fled Gambia in 2017 after regional militaries launched an operation to remove him, repeatedly clashed with the British authorities over criticism of his government’s human rights record.

Under Jammeh’s 23-year rule, the country gained a reputation as a repressive state where journalists and political opponents were jailed, tortured and even murdered.

Barrow, who won a December 2016 election that Jammeh rejected, is attempting to rehabilitate Gambia’s image abroad.

Critics of the Commonwealth see it as an outdated relic of Britain’s imperial past, while advocates say it gives small countries like Gambia a seat at the table with larger states, and has potential to improve life for its 2.4 billion residents.

Born of British and French colonial rivalry in the 19th century and surrounded by Francophone Senegal, Gambia – a tourist haven and groundnut producer – won independence from Britain in 1965.

Prince Charles, who was accompanied by his wife Camilla, visited a medical research facility run by the London School of Hygiene and Tropical Medicine, and an armed forces training center, where Gambian troops are preparing for a peacekeeping mission in Sudan.

The royal pair will fly to Ghana on Friday and to Nigeria on Nov. 6.