13 dead after bus plunge into river 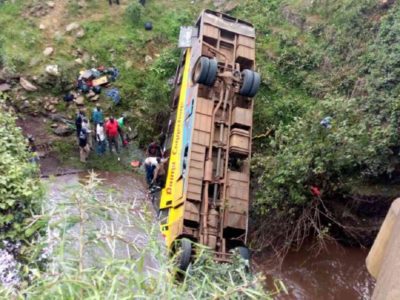 A Woman’s fight with a bus driver caused the bus to plunge into China’s Yangtze River, killing 13 people, state media reported on Friday.

The accident happened on Sunday in the south-western metropolis of Chongqing.
All the 13 bodies have been retrieved from the water, and two people remain missing.

Authorities on Wednesday recovered the tachygraphy and surveillance video from inside the bus.
The video, published by state media, shows a passenger hitting the bus driver in the head with her cell phone.

When the driver hits her back, he loses control of the steering wheel, causing the bus to veer to the left.
Security camera footage from the bridge shows the bus veering onto oncoming traffic, crashing into a red car and plunging off the bridge.

According to authorities’ investigation, a 48-year-old female passenger wanted to get off the bus, but the driver had to make a detour due to road maintenance, Xinhua news agency reported.