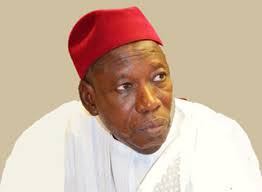 A pressure group, Kano Youth Coalition for Advocacy and Development, (KAYCAD), has ‎urged Kano State Government to wage ceaseless war against corruption at levels of governance.

The chairman of the group, Malam Rabiu Shamma, disclosed this in Kano on Thursday while briefing newsmen on bribery allegation against Gov. Abdullahi Ganduje.
‎
Shamma also reiterated the stance of KAYCAD against corruption and corrupt practices in whatever form and called on stakeholders to ensure that all hands were on deck to wage the war against corruption.
‎
The group also commended the state House of Assembly for promptly setting up an investigative panel to investigate the allegations against Ganduje.

It however, condemned the use of school children who carried placards as protesters in support of the governor during the public hearing by the state House Assembly on Oct. 25.‎

“We strongly condemn the exploitation of school children as protesters carrying placards in support of the governor during the public hearing conducted at the state assembly.

“We call on all relevant stakeholders to expedite action in order to ensure speedy conclusion of the investigation and to ensure punitive measures against who so ever is found guilty,’’ the group said.

It also commended security agencies for rising up to the occasion during the investigative hearing and urged them to keep the tempo in subsequent events.