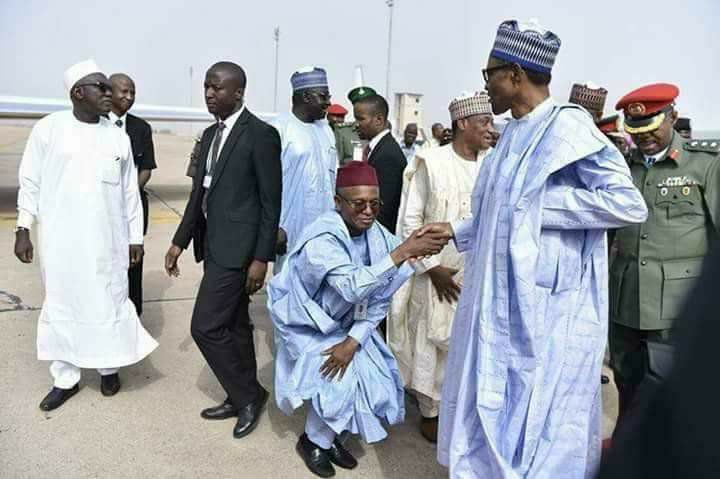 President Muhammadu Buhari’s visit to Kaduna State in the midst of sectarian crisis that claimed tens of lives was a display of exemplary leadership and governance with a human face, says an organization.

The Buhari Media organisation (BMO) hailed the President in a statement issued by the group’s Chairman Niyi Akinsiju and Secretary Cassidy Madueke on Thursday in Abuja.

The group noted that Buhari had during the visit met with political, traditional and religious leaders in an on-going effort to bring the life consuming mayhem to an end.

It added that the president also read the riot act and seriously warned trouble makers in that state and elsewhere in the country that his government would no longer tolerate such blood-letting.

In its reaction to the visit, the group hailed Buhari for this unprecedented move and for showing that governance should, and can, have a human face.

“This is the first time in the history of this Nation that a sitting President would visit a troubled spot right in the midst of a crisis.

“This is exemplary leadership, a commendable display of governance with a human face; this is how we know a leader that cares,” it said.

BMO recall that the visit was a grand departure from what happened in a not too distant past.

“We recalled that in a Peoples Democratic Party (PDP) government headed by Chief Olusegun Obasanjo as President, we were faced with a similar situation like Kaduna.

“Rather than a solution with a human touch, bombs and missiles were deployed in Odi; PDP government descended on that poor village and completely wiped it out.

“This is the route that Buhari has decided not to take,’’ it said.

The statement said Buhari was a war General just like Obasanjo, but the difference was that while one General was a humanist, the other was nihilist.

The group said it believed that Nigerians were watching and taking due notice.

Meanwhile, the group has also advised Sen. Bukar Ibrahim, former Yobe governor and three-time senator, to quietly retire to his village rather than cry over spilt milk.

It also dismissed the former governor’s attempt at disowning comments attributed to him as an afterthought.

BMO noted that rather than play to the gallery after losing his bid for an unprecedented fourth term in the Senate, the Senator should have quietly nursed his wounds.

“Here is a man who is perhaps one of the biggest beneficiaries of the tsunami that trailed President Muhammadu Buhari’s 2015 victory.

“Aside from being a Senator, his wife was appointed a minister from the House of Representatives and has also secured a ticket to return to the National Assembly in 2019.

“But he is clearly bitter that he has been denied a return to the Senate as if Yobe State is a personal estate,” it said.

The group pointed out that the North East that the Senator claimed the President has little chance of clinching in 2019 has benefitted a lot from the Buhari administration.

“It is unfortunate that the Senator has chosen to be blind to the infrastructural and socio-economic progress as well as improved security in the North East in the past three and a half years of this administration,” it said.

According to BMO, not even North West Nigeria has benefitted as much as the North East region in terms of appointments.

It said the north east produced the Secretary to the Government of the Federation, Chief of Army staff and the Chairman of the Economic and Financial Crimes Commission.

BMO added that inspite of Ibrahim’s attempt to recant, he had inadvertently exposed himself as one of those senators who had been working against the success of the Muhammadu Buhari-led administration.