Osinbajo, Ooni of Ife, others for African Value Awards 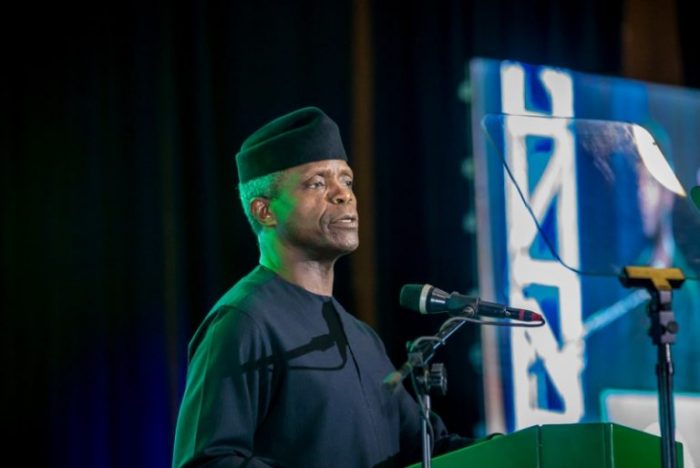 Prof. Yemi Osinbajo, Nigeria’s Vice-President and the Ooni of Ife, Oba Adeyeye Ogunwusi have been nominated for the 2018 edition of the prestigious African Value Awards(AVA).

According to him, other Nigerian nominees for the continental award, which will hold on Nov.17 in Abuja, include Nigerian Business mogul and Philanthropist, Prince Arthur Eze, Gesi Asamaowei and Hon. Davematics Ombugadu.

Obah said the names were among the list of nominees made available by Value Re-orientation and Developmental Initiative Africa (VARDIAFRICA), the organisers of the annual award.

He said the nominees would be honoured, among other Africans drawn from different countries, for their outstanding leadership roles and selfless service in peace building, economic and youth development in Africa.

He noted that the award was based on recipients’ commitment to building African values, economic development, youth empowerment, community and Educational, development, humanitarian services and efforts at building peaceful coexistence.

“The award is for men and women from different spheres of human endeavours, who through innovation, hard work and exemplary leadership, ensure peace and development across the continent.”

“Prof. Osinbajo, as the Vice President of Nigeria is a tested and trusted leader who has shown commitment to the comprehensive change programme of the Buhari administration, especially in the fight against corruption.

“He has always shown leadership values of character, strong will and commitment to peaceful co-existence among Nigerians, which is in consonant with what the AVA represents.

“He is a bridge builder and a symbol of loyalty and patriotism in the service of fatherland, “he said.

Obah explained that the Ooni of Ife would be honoured with the “African Tradition Icon of the Year” award, for his commitment to preserving African culture and values with his exalted throne.

“He is a unifier and a true representative of African values and cultural heritage, who has attracted deeper respect to the traditional institutions in Nigeria and Africa at large.”

The planning committee chairperson said that since the initiative was non-political, it recognised service to humanity in which every capacity was the benchmark that earned the recipients nomination space.

“We believe that this recognition will always be the push for them to achieve more in their various fields in building a better society.”

“Service to humanity and making society a better place for everyone is the essence of leadership.

“Anyone who has notably used his office or profession to serve and touch society positively is a leader that needs to be recognised.”

He added that there were entrepreneurs and corporate bodies that were also listed on the honour roll for their contribution to the economic growth of the continent.

“The Heritage Bank, Stanel Group, CCECC, Spectranet, Ethiopian Air, and Airpeace, as well as the Nigeria’s FIRS will be recognised, among others.”

According to Obah, the 2018edition of the award will also feature a dialogue on peace and security, climate change and youth empowerment in Africa.

He said that the event is scheduled to hold at Nigeria Air Force Conference Centre in the Federal Capital Territory.