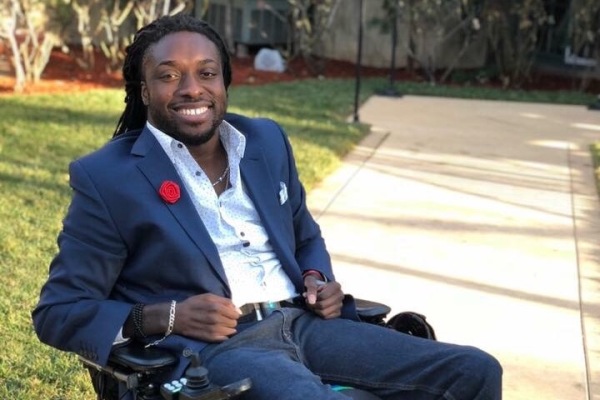 Nnaka, 30, born of Nigerian descent, but raised in Macon, Georgia had a footballer accident nine years ago at 21 and his friends had been trying to raise the amount with a GoFundMe account.

The TV host said during her show that she wanted to surprise him for his good deeds and dedication towards helping others, in which over 50 persons had written letters to her describing how “incredible’’ he was.

Nnaka, since his accident nine years ago had been engaged in helping others, especially at-risk youth in his community.

The footballer had an accident, while playing for a semi-pro football team and tackled an opponent during a game in Arkansas.

He was said to have undergone a nine-hour neck surgery and spent 10 days in intensive care before returning to Tulsa, partially paralyzed

Meanwhile, his apartment building, along with his belongings was said to have been engulfed by fire on Sept 19 and the van that allows him to drive himself was totaled and needed to be replaced.

The footballer is said to be an asset to the Tulsa community by being an advocate for the physically challenged and countless other community projects.

Nnaka, who is a board member for Tulsa Transit has been heavily involved in raising money for the Tulsa United Way, as part of Tulsa Beyond Initiative to redesign and reimagine Tulsa high schools.

He serves as a councilor for displaced and troubled youth and Emeka inspires, encourages, and educates students and fellow citizens as a motivational speaker.

Emeka was injured in an Oklahoma Thunder football game 9 years ago and uses his experience to motivate people to not let their circumstances define them but use them to propel them to do and be better.