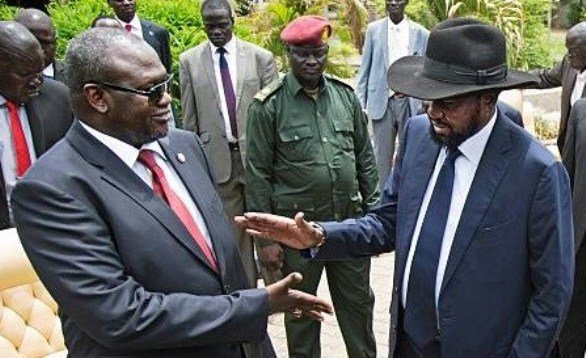 UN has welcomed the reconciliation of South Sudan’s President Salva Kiir and his estranged Deputy and opposition leader, Riek Machar whose rivalry has turned the country into a theatre of war.

UN Special Representative and Head of the UN Mission in South Sudan (UNMISS), David Shearer, said he hoped the reconciliation would finally end years of brutal conflict across the world’s youngest country.

Thousands of elated citizens gathered in South Sudan’s capital of Juba to celebrate the reconciliation following an agreement signed in September between the Kiir and Machar.

“To see parties that have previously been divided by violence coming together here in Juba, in a public sign of unity, sends a strong signal to the citizens of this country that you are genuinely committed to end the suffering and building durable peace,” Shearer said.

In a gesture of reconciliation, Kiir announced the imminent release of Machar’s spokesperson, who has been detained since late 2016 on charges of treason.

Alongside Kiir and Machar, other Heads of State, high-level representatives and leaders from other opposition groups attended the event marking the ‘Revitalised Agreement on the Resolution of the Conflict’, which was billed as a celebration of “the Dawn of Peace, Appreciating Friends, Cherishing Reconciliation and Unity”.

Shearer also paid tribute to heads of the East African Intergovernmental Authority on Development (IGAD) and the governments of neighbouring Sudan and Uganda for their critical role in securing the peace agreement.

The UNMISS head, however, cited trust as “the key ingredient needed at every step” moving forward.

“The big challenge ahead is to build trust and confidence between the parties – and between the parties and the people,” Shearer said, adding that it was the responsibility of “all of us here today; officials, civil society, religious leaders and the international community” to do so.

The signatories unanimously stressed their commitment to translating peace-promoting words into action while underscoring the need for the international community to politically and economically support the way forward.

“We will stand alongside the parties as they move forward in peace,” Shearer said adding: “We will use our resources and our presence across the country to support reconciliation and peacebuilding”.

Kiir offered the South Sudanese people something of a mea culpa, saying that “as president, I want to apologize to all the parties of the conflict, and to the people of South Sudan, for our betrayal of the promise of our struggle for independence.”

“We will prove skeptics wrong by sincerely implementing the agreement fully, in letter and spirit,” the president said.