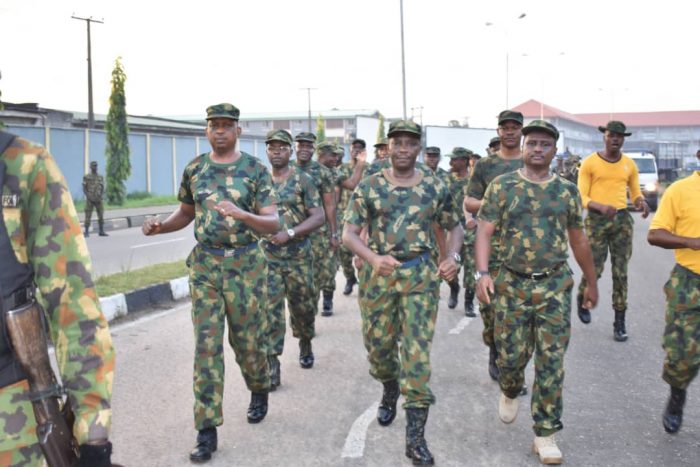 No fewer than 800 personnel participated in the quarterly route march organised by the Nigerian Air Force (NAF) held in Lagos on Saturday to keep them fit.

The Air Officer Commanding, Logistics Command, NAF, Air Vice Marshal Nnamdi Ekeh, who flagged off the 8km route march at the Sam Ethnam Base, Ikeja, said the aim of the exercise was to keep officers and men physically and mentally fit.

He noted that the route march would also enhance the health and agility of officers and men as well as make them flexible to adapt to emergencies.

According to him, a soldier that is not fit cannot perform satisfactorily, especially during emergencies.

“The Chief of Air Staff (CAS), Air Marshal Sadique Abubakar, has made it mandatory that each of the officers and men of NAF must participate in this exercise

“The aim of this route march is to enable personnel to perform their statutory role effectively,” he said.

Ekeh commended personnel for demonstrating a high level of physical fitness, stating that a sound mind in a sound body.

He also encouraged them to remain focused and professional in the discharge of their constitutional role, as the service would not allow any territory of Nigeria to be undermined by anyone.

“I urge you not to rest on your oars but redouble your efforts toward accomplishing more.

The eight-kilometre route march took the NAF personnel from the Base to the Muritala Muhammed International Airport before returning to the Base.