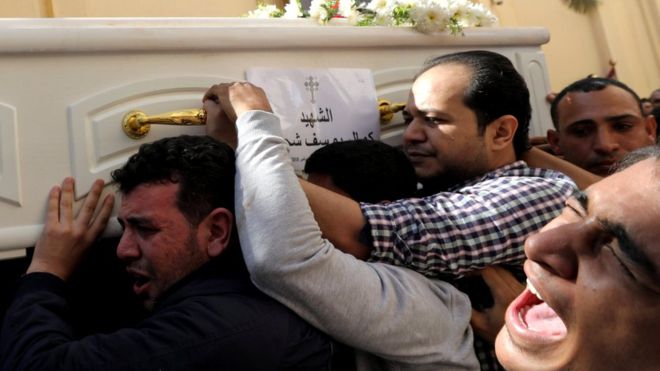 Grieving Coptic Christians
with one of the corpse for burial.
Photo: BBC/Reuters

Coptic Christians have gathered in Egypt to take part in the funerals of a group of pilgrims killed by gunmen as they headed to a monastery on Friday.

Mourners expressed grief and anger as they left Prince Tadros church in the city of Minya, where the bodies of six victims lay in white coffins.

A seventh had been buried on Friday.

The Islamic State (IS) group earlier said it was behind the attack, the latest in a series by extremists on Egypt’s Coptic Christian minority.

Egypt’s Copts, who make up most of the Muslim-majority country’s Christian minority, have in the past accused the authorities of making only token gestures to protect them from such attacks – including one at the same spot which left 28 dead in May 2017.

Friday’s attack on two buses near the Monastery of St Samuel the Confessor in Minya also left at least seven others wounded – including children, according to reports.

Egyptian Christians living in fear for the future

On Saturday, people displayed their anger and frustration: according to news agency AFP, the coffins were carried away from the church accompanied by cries of “with our souls, with our blood, we will defend the cross!”, while security members – sent to guard the congregation – were booed.

“What do these terrorists want? Do they want us to hate Muslims?” said Michel, 23, who lost a neighbour in the attack.

“Should I carry a gun with me when I go to pray or when I’m at home? Because I could die if I go to church,” he asked.

Others, however, struck a more conciliatory tone.

“We would like to tell them [the attackers] that we still love them despite what happened. We have a question though – why are you doing this to us? We do not commit malice towards anyone,” Rad Noseer Mitri, priest of Mar Girgis Church, told mourners, according to news agency Reuters.

“We serve our church and nation in complete honesty. We play no role in terrorism or hate. We only play a role in serving our church and country like any other people all around the world.”

Bishop Makarios of Minya – who thanked security staff – promised the congregation they would “not forget the promises of officials, including the president of the republic, that the criminals will be punished”.