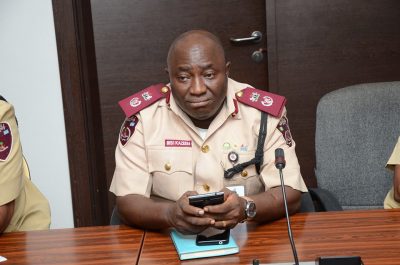 The Federal Road Safe Corps (FRSC) has described as “incorrect, untrue and misleading” reports of alleged “ambush’’ and “extortion” by the corps over new number plates.

“The attention of the Federal Road Safety Corps has been drawn to a story in the press alleging `ambush’ and `extortion’ by the Corps over new number plates.

“Pursuant to the introduction of the new number plate, the Federal Road Safety Corps duly informed the public of the new regime and further gave time for the replacement of the old number plate.

“The Corps Marshal, Mr Boboye Oyeyemi, also ensured that the corps undertook a public enlightenment on the security benefits of changing from the old to the new number plate at the point of renewing their vehicle documents which has only one year validity period,” he said.

According to Kazeem, item four of the communiqué issued at the end of the 136th meeting of the Joint Tax Board (JTB) held on the Nov. 28, 2016, states categorically that the renewal of vehicle particulars on the old number plates would be discontinued with effect from the next due date.

“This was to serve as a measure to check fraud and enhance revenue collection,” he said.

He further said that the security feature of the new number plate was one of the key reasons motorists were expected to accept the introduction.

“This is as the National Uniform Licensing Scheme (NULS) helps in the harmonisation of data both of vehicles and drivers’ information system in the central data base,” he said.

He added that the new data base also made it easier to track and apprehend criminals especially those involved in car theft.

“It would be recalled that following the protests over the publication by FRSC of its intention to commence the arrest and prosecution of drivers or owners of vehicles using any number plate obtained under the repealed National Road Transport Regulation (NRTR) 2004 by Oct. 2013; one Mr Emmanuel Ofoegbu instituted an action against FRSC at the Federal High Court in Lagos in FHC/CS/1332/13 Emmanuel Ofoegbu Vs FRSC.

“The Federal High Court presided over by Justice JT Tsoho held, inter alia that FRSC had no statutory powers to set deadlines for change-over to the new number plates since there was no enabling law to that effect.

“As a result of the ruling by the Court below, the Federal Road Safety Corps appealed the Judgment in Court of Appeal and on Oct.31, 2014, the Court sitting in Lagos, unanimously held that FRSC had statutory power.

“This is in line with the 1999 Constitution under the FRSC (Establishment) Act, 2007 and the NRTR 2012 to regulate the use of number plates and to set deadlines for change-over to the new ones as provided for in the NRTR 2012.

“The ruling upholding the power of the corps, the court said: “The Court below was thus right to issue the injunction to protect the respondent’s right to the enjoyment of the new number plate of his private vehicle issued on March 18, 2013, to expire on March 17, 2014.

“I will allow the appeal in part. For the avoidance of doubt, the appeal succeeds only in part to the effect that Regulations 2012 has legal force and is enforceable from Jan. 1, 2013, the administrative date assigned to it by the appellant.

“The part of the decision of the court below declaring Regulations 2012 unconstitutional and without back up legal framework is hereby set aside.

“By the above decision of the court, it follows that there is no legal impediment against the enforcement of the provisions of the NRTR 2012 as it pertains to change over to the new number plates,” he added.

The statement further said that as such, the commencement of enforcement on the aforementioned was in tandem with the provisions of the law as stipulated in NRTR 2012 and the 1999 Constitution.